The two sides are scheduled for another round of talks Wednesday 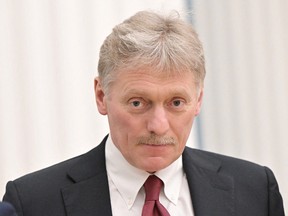 (Bloomberg) — A proposal for Ukraine to become a neutral country but retain its own armed forces “could be viewed as a certain kind of compromise,” Kremlin spokesman Dmitry Peskov said Wednesday, hinting at possible progress in peace negotiations.

Peskov declined to provide details beyond confirming that the idea of Swedish or Austrian-style neutrality is under discussion in the talks now underway between Russia and Ukraine to try to end the war that’s now in its 21st day.

Only a “Ukrainian” model with enforceable security guarantees is acceptable to Kyiv, Ukrainian presidential adviser Mykhaylo Podolyak said by text message. “This means that the signatories do not stand aside in case of attack against Ukraine as they do now.”

The two sides are scheduled for another round of talks Wednesday. Peskov’s comments came after Russia’s chief negotiator, Vladimir Medinsky, reported “some progress” in the negotiations, but warned that some issues remain unresolved. Late Tuesday, President Vladimir Putin sounded a more downbeat note, accusing Kyiv of not being serious enough about seeking compromises.

Ukrainian President Volodymyr Zelenskiy said Russia’s “positions in the negotiations sound more realistic” in an address to the nation, though he said efforts are still needed to reach an agreement. Russian Foreign Minister Sergei Lavrov also indicated there’s some hope for compromise, as he said that Moscow’s demands for Ukraine’s neutrality are under serious discussion though the talks aren’t going easily.

Ukraine was pressing for membership of the North Atlantic Treaty Organization before the war, though Zelenskiy has indicated he recognized there’s little prospect of the alliance accepting his country any time soon. He has called for Ukraine to receive firm guarantees of its sovereignty.

Russia had demanded full demilitarization of Ukraine when Putin ordered the invasion Feb. 24 but now appears to be backing away from that demand.

Russian forces continue to strike infrastructure targets though the overall military situation is largely unchanged, the General Staff of Ukraine’s Armed Forces wrote on Facebook. The state emergency service said a shell hit a 12-story apartment building in the capital Kyiv, causing a fire and injuries. Russia’s Defense Ministry said its forces are advancing through urban areas in the town of Sievierodonetsk in the eastern Luhansk region.

NATO defense ministers are in Brussels to discuss ways to reinforce the alliance’s eastern members and prevent spillover from the war in Ukraine, a risk illustrated by recent crashes of drones. U.S. President Joe Biden will travel to Europe for NATO and European Union summits next week, while Zelenskiy is due to deliver a virtual address to the U.S. Congress on Wednesday.

How to bet on March Madness: Brackets, spreads, parlays and more

Zelenskyy to the U.S. Congress: ‘Remember 9/11, when innocent people were attacked by air? We live that everyday'