Biden detailed efforts of the United States and its allies to respond to the invasion of Ukraine, including by imposing costs on Russia. 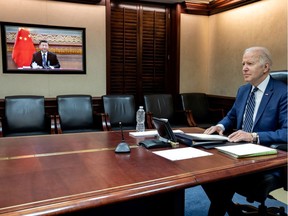 WASHINGTON/BEIJING — U.S. President Joe Biden warned Chinese leader Xi Jinping on Friday of ‘consequences’ if Beijing gave material support to Russia’s invasion of Ukraine, the White House said, while both sides stressed the need for a diplomatic solution to the crisis.

While the White House did not detail what those consequences could be, or how the U.S. would define “material support,” press secretary Jen Psaki indicated China’s massive trade flows could be impacted.

“Sanctions are certainly one tool in the tool box,” Psaki told a regular news briefing when asked whether China, the world’s largest exporter, could face trade tariffs or sanctions.

Speaking after a nearly two-hour video call between Biden and Xi, Psaki said the United States would communicate any consequences directly to Beijing “with our European partners and counterparts.”

In the call, which came at a time of deepening acrimony between the world’s two biggest powers, Biden detailed efforts of the United States and its allies to respond to the invasion of Ukraine, including by imposing costs on Russia.

“He described the implications and consequences if China provides material support to Russia as it conducts brutal attacks against Ukrainian cities and civilians,” the White House said in statement, adding that Biden “underscored his support for a diplomatic resolution to the crisis.”

A senior U.S. official briefing reporters on the call said Biden communicated that Beijing would face consequences not just from the United States but the wider world.

“The president really wasn’t making specific requests of China,” the official said. “I think our view is that China will make its own decisions.”

China’s foreign ministry said Xi told Biden the war in Ukraine must end as soon as possible and called on NATO nations to hold a dialog with Moscow. He did not, however, assign blame to Russia for the invasion, based on Beijing’s statements about the call.

“The top priorities now are to continue dialog and negotiations, avoid civilian casualties, prevent a humanitarian crisis, cease fighting and end the war as soon as possible,” Xi said.

Xi advocated Russia-Ukraine dialog and negotiations, and suggested Washington and NATO conduct talks with Russia to solve the “crux” of the Ukraine crisis and resolve the security concerns of both Russia and Ukraine.

“The Ukraine crisis is something that we don’t want to see,” Chinese state media quoted Xi saying in the call, which it said was requested by the U.S. side.

“Sweeping and indiscriminate sanctions would only make the people suffer. If further escalated, they could trigger serious crises in global economy and trade, finance, energy, food, and industrial and supply chains, crippling the already languishing world economy and causing irrevocable losses,” the ministry quoted him as saying.