The announcement is expected to be made on Friday evening 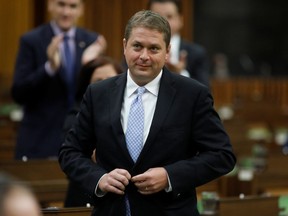 Former Conservative leader Andrew Scheer will support Pierre Poilievre’s bid for leadership. The announcement will be made on Friday evening during a rally in Regina, Saskatchewan.

Scheer was seen beside Poilievre as he was making his second promise as leadership candidate: repealing what he deems as “anti-energy and anti-pipeline legislation,” formally known as bills C-69 and C-48, and building “Canadian pipelines with Canadian workers.”

Speaking to media, Poilievre promised to replace them with new laws that would “protect the environment, consult First Nations and provide them with paychecks and give quick decisions on proposed energy projects,” should he be named leader and then elected Prime Minister.

“We could be liquefying natural gas off in Newfoundland, which has a proposal to do that and ship that natural gas to Europe in order to break the European dependence on Russia. We could be shipping Canadian natural gas to Asia to shut down dirty coal fire plants,” he said.

Both pieces of legislation were adopted in June 2019, under Justin Trudeau’s majority government. They have been heavily criticized by the Conservative opposition.

Scheer resigned as Conservative leader in December 2019, and stayed on as interim leader until Erin O’Toole was elected in August 2020. O’Toole was booted out as leader earlier this year by a majority of the caucus. Days later, Poilievre announced he was running for leader.

Stakes will be higher than ever as the Conservatives are choosing their third leader since Trudeau has formed government in 2015.

Vintage Mercedes blows Bring a Trailer record out of the water

Vintage Mercedes blows Bring a Trailer record out of the water