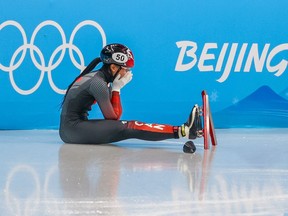 Canadian speed skater Alyson Charles is looking ahead to her next event at the 2022 Beijing Winter Olympics after a chaotic run through the women’s 500-metre races.

Charles took to Instagram after Monday’s results, writing in French that the event had been a highly emotional journey after finishing eighth. She went on to write she was “now focusing on the 1000m and the relay with my girls!”

Canadian short-track speed skating star and 2022 Olympic flag-bearer Charles Hamelin was among those to offer encouragement, responding to Charles’ post in French and telling her she was wonderful to watch during the competition and advising her to hold on the positives from her Olympic experience.

Charles was involved in a quarterfinal race that raised some eyebrows among fans following a crash. Footage appeared to show Chinese skater Fan Kexin flicking a lane marker into Charles’ skates during the final lap. Charles went careening into the boards, taking Kexin with her.

Twitter user Bill Murtagh was among those to voice their displeasure as video replays appeared to show Kexin’s hand move the marker. “You can clearly see it was the hand of Chinese skater Fan Kexin that pushed the marker that caused the spill. Bad call,” he wrote.

Canadian skater Florence Brunelle was wrongly DQ’d in the Women’s 500 metre short track semi. You can clearly see it was the hand of the Chinese skater Fan Kexin that pushed the marker that caused the spill. Bad call. #TeamCanada #Olympics pic.twitter.com/6mbwUo3pwz