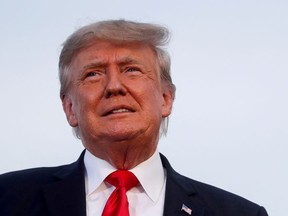 Maybe the first big clue on Ottawa’s trucker occupation should have been the Confederate flags.

Or maybe the tip-off was former U.S. president Donald Trump calling Prime Minister Justin Trudeau a, “far left lunatic … who has destroyed Canada with insane Covid mandates,” — this from the guy whose administration oversaw the deaths of 412,000 Americans in the pandemic he once claimed, “Is going to disappear.”

Certainly, there were people claiming from the get-go that the trucker convoy had been hijacked by far right-wing U.S. factions.

A week ago, police in Ottawa said they were working with the FBI and had voiced concerns that there was a hefty U.S.presence in the funding of the trucker protest ensconced in Ottawa.

The GoFundMe kitty had crossed $10 million when the platform was asked to take a closer look; GoFundMe did indeed shut down the “freedom convoy,” stating that evidence from law enforcement and “reports of violence and other unlawful activity” made it clear that the fundraiser for the truckers was in violation of their own terms of service.

The trucker convoy organizers then went to GiveSendGo , a platform that bills itself as the No. 1 free Christian fundraising site.

The Guardian did an expose of GiveSendGo after a data breach last year revealed the platform’s alt-right associations with vigilantes and hate groups such as the Proud Boys — groups banned from other platforms for hate speech and violence.

CNBC reiterated Sunday that Ottawa police said they were investigating threats against public figures jointly with the FBI.

They reported, “The well-organized blockade, which police say has relied partly on funding from sympathizers in the United States, saw protesters bring in portable saunas on Saturday to combat frigid temperatures.”

Twitter was full of bizarre material on Sunday from U.S. Republicans, with Attorney General Ken Paxton, of Texas, for example, tweeting:

This retort from “Unbranded” (@unbranded63) is fairly typical  of the outraged responses:  “American Trumpists, tired of losing, turned their efforts to upending their northern neighbor. A few million dollars raised by insurrectionist Americans, and they thought they could topple the democratically elected government of Canada in a week. They’re deluded as always.”