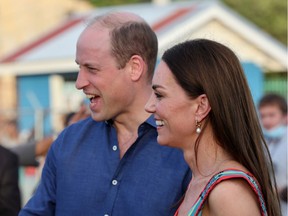 KINGSTON — Britain’s Prince William and his wife Kate arrived in Jamaica on Tuesday as part of a week-long Caribbean tour, hours after activists protested to demand reparations for slavery amid growing scrutiny of the British Empire’s colonial legacy.

The Duke and Duchess of Cambridge arrived in Belize on Saturday to start the tour that coincides with Queen Elizabeth’s 70th year on the throne, and will conclude it over the weekend with a visit to The Bahamas.

“There are historical wrongs and they need to be addressed,” said Dr. Rosalea Hamilton, an economist and activist who helped organize the rally where demonstrators read out 60 reasons for reparations. Jamaica celebrates 60 years of independence in August.

“Part of the conversation is how we begin a new dispensation and (discussion) of actions for the new generation,” said Hamilton, dressed in a T-shirt printed with the phrase “seh yuh sorry.”

The royal visits to Caribbean nations are seen as an effort to convince other former British colonies – including Belize and The Bahamas – to stay on as “realms” of the British monarchy amid a rising regional movement towards republicanism.

‘WHAT ARE THEY DOING FOR JAMAICA?’

Dance hall singer Beenie Man in an interview with Good Morning Britain questioned the royal visit and expressed skepticism about the queen, saying “What are they doing for Jamaica? They’re not doing anything for us.”

One Jamaican judge, Hugh Small, this month burned his ceremonial British judicial wigs in a symbolic protest of the fact that a London-based tribunal called Privy Council continues to be Jamaica’s highest court of appeals.

William and Kate are scheduled to participate in a “sports activity” and a “cultural activity” on Tuesday as part of the tour that wraps up on Thursday, according to a preliminary agenda seen by Reuters.

The couple had to change their itinerary in Belize following a protest by a few dozen indigenous villagers upset that the couple’s helicopter was given permission to land on a soccer field without prior consultation.

Marlene Malahoo Forte, who was Jamaica’s attorney general until January, in December told the local newspaper Jamaica Observer that she had received instructions from Prime Minister Andrew Holness to reform the constitution to become a republic.

That process would require a referendum, per Jamaica’s constitution, making it more complicated than in smaller Barbados – which was able to make the change via an act of parliament.