Camilla, Duchess of Cornwall, struggling to ‘shake off’ COVID symptoms

Camilla, Duchess of Cornwall, struggling to ‘shake off’ COVID symptoms 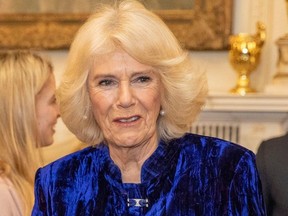 Camilla, Duchess of Cornwall, is struggling to “shake off” the symptoms of coronavirus.

The 74-year-old royal was revealed to have tested positive for the virus last month, days after it was announced her husband Prince Charles had contracted COVID-19 for the second time, and she’s admitted she has been unable to get rid of the cough she’s now had for a few weeks.

Speaking to rowers Kat Cordiner, Abby Johnston and Charlotte Irving at an International Women’s Day event at Clarence House on Wednesday, she told them: “It’s taken three weeks and still can’t get shot of it. Probably my voice might suddenly go and I might start coughing and spluttering.”

The rowers broke the transatlantic record in January when they rowed across the Atlantic in 42 days, seven hours and 17 minutes, raising money for Macmillan, Cancer Research UK and the Royal Marsden Cancer Charity.

The trio told the duchess about their journey in a 30-minute talk, revealing they suffered from cramps during the trip and struggled to walk straight once they’d completed their challenge.

They also presented Camilla with a flask and a fleece and Kat – who has cervical cancer – joked the duchess “may take up rowing” following their chat.

Emerald Fennell – who played the younger duchess in two seasons of ‘The Crown’ – laughed and joked with the royal at the reception.

But Camilla claimed she found it “very reassuring” to know that Emerald was among the guests at the reception.

She quipped: “For me, it’s very reassuring to know that if I should fall off my perch at any moment, my fictional alter ego is here to take over. So, Emerald – be prepared!”

Take a minute for this time-honoured task: spring ahead your clocks

Take a minute for this time-honoured task: spring ahead your clocks