The goal is to raise money to help the millions of refugees and internally displaced Ukrainians forced to flee their homes following Russia’s invasion of their country. 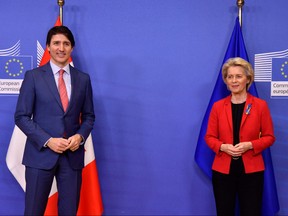 Prime Minister Justin Trudeau and European Commission President Ursula von der Leyen pose before a meeting after a meeting at the EU headquarters in Brussels, on March 23, 2022. Photo by Geert Vanden Wijngaert/POOL /AFP via Getty Images

OTTAWA — Canada and the European Commission will spearhead an international fundraising campaign to help people fleeing the war in Ukraine.

The fundraising effort, called “Stand Up For Ukraine” will engage politicians, artists and businesses, among others, and is to culminate with an April 9 pledging event to be hosted by Prime Minister Justin Trudeau and European Commission President Ursula von der Leyen.

They are partnering with the international advocacy organization Global Citizen to raise funds for the humanitarian crisis spawned by the worst fighting in Europe since the Second World War.

A statement from Trudeau’s office says Ukrainian President Volodymyr Zelenskyy is inviting musicians, actors, athletes, business leaders, politicians and anybody else so inclined to take part in a large-scale social media rally to help his besieged country.

Today, our message to Ukrainians is clear: We’re standing with you, we’ve got your back, and – together with President @vonderLeyen and @GlblCtzn – we’re rallying the world to continue providing critical assistance where it’s needed most. Find out how: https://t.co/TsbeTdjvJD

The goal is to raise money to help the millions of refugees and internally displaced Ukrainians forced to flee their homes following the Feb. 24 Russian invasion of their country.

Trudeau and von der Leyen met this week in Brussels on the prime minister’s second trip to Europe in two weeks to confer with allies on the Russian attack.