Canada to present its 2022 budget next week as inflation soars

Canada to present its 2022 budget next week as inflation soars

Trudeau pledged affordable housing would be a major focus in the upcoming budget. 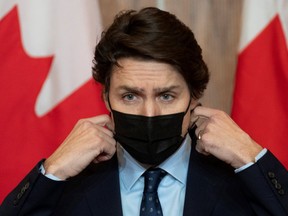 OTTAWA — Canada’s federal government will present its 2022 budget on April 7, Finance Minister Chrystia Freeland said on Tuesday, as it plans to boost spending on defense and other programs even as it grapples with hot inflation.

Freeland said the Liberal-led government is committed to growing Canada’s economy, making life more affordable and continuing to build a society where no one is left behind.

“That is exactly what we are doing, and that is what we’re going to continue to do in the budget that I will present to this house on April 7,” Freeland said during question period in parliament. She added the budget would be introduced at 4 p.m. ET (2000 GMT).

Canada’s Liberals were re-elected last year for a third term, but Prime Minister Justin Trudeau failed to secure a majority. This month, he announced a support deal with the opposition New Democrats that will keep him in power until 2025.

In exchange, the Liberals will back a national dental-care program for low-income Canadians and to move forward on a national prescription drug plan – two costly initiatives.

Economists said the agreement will likely lead to heftier deficits and threatens to upend government promises to rein in inflation. Canada’s inflation rate hit 5.7% in February and is expected to go higher.

Canada has also pledged to spend more on defense following Russia’s invasion of Ukraine, though it has not yet provided any details.

Earlier on Tuesday, Trudeau pledged affordable housing would be a major focus in the upcoming budget.

“I can assure you that investments in housing … across the country will be a strong topic in the budget that we will be presenting,” Trudeau said.

The price of a typical home in Canada has more than doubled since Trudeau’s Liberals took office in November 2015 and are up 52% since the pandemic onset. (Reporting by Julie Gordon and Steve Scherer in Ottawa; editing by Jonathan Oatis)

Why the Bank of Canada is now ‘talking tough’ on inflation

Should I just cut my overbearing sister out of my life? Ask Ellie

Should I just cut my overbearing sister out of my life? Ask Ellie