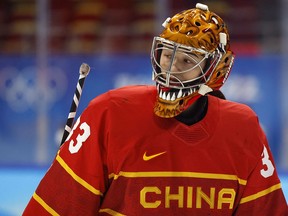 Zhou is one of a large number of foreign-born players on China’s Olympic ice hockey teams at the Beijing Olympics, recruited to play for the Chinese national team despite the fact that China does not allow for dual citizenship. Photo by Jonathan Ernst /Getty Images

BEIJING — A Canadian-born member of China’s women’s Olympic ice hockey team said she was not allowed to speak English at a post-game media appearance on Sunday in Beijing, in a scene reflecting the relations between the host nation and the foreign-born athletes bolstering its sporting ranks.

The awkward moment occurred in the “mixed zone” at Wukesong Sports Centre, where members of the media assembled to ask questions of the host team players following their 2-1 shootout win over Japan.

Goaltender Zhou Jiaying answered questions in halting Chinese and was then asked by a reporter if she could take a few questions in English. She turned to an aide and said in Chinese that she was not allowed to do this, which the aide relayed to the reporters.

“She’s not allowed to speak English,” the aide said in English. “I’ll try to translate for her.”

A spokesperson for China’s National Sports Bureau and the Chinese Ice Hockey Association could not immediately be reached for comment on Sunday night.

Zhou is one of a large number of foreign-born players on China’s Olympic ice hockey teams at the Beijing Olympics, recruited to play for the Chinese national team despite the fact that China does not allow for dual citizenship.

Her official Olympic bio lists English, Mandarin and French among the languages she is fluent in – multilingual credentials that would normally be seen as an asset at the Olympics, where media representatives converge from across the globe.

Zhou’s “previous name” is listed on her Olympic biography as Kimberly Newell, who can also be found on Twitter.

The Chinese public have sometimes appeared divided over the foreign players brought in to compete for the host nation in the ice hockey tournament.

Asked by a reporter what her goals were for the competition, Zhou responded in Mandarin and the aide translated, before turning to the 26-year-old Vancouver resident and murmuring “OK?”

Asked about the name she adopted to play at the Beijing Games, which is derived in part from her Chinese-born mother’s side of the family, the aide relayed her reply: “‘Jia’ means like ‘nice’ and ‘warm’ and ‘beautiful’.”

Zhou leaned over and whispered: “Auspicious.”