Canadians urged to join Armed Forces rather than join 16,000 foreign volunteers in Ukraine

Canadians urged to join Armed Forces rather than join 16,000 foreign volunteers in Ukraine 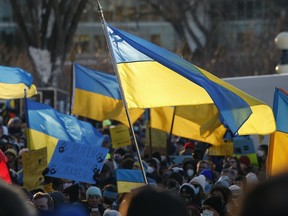 Thousands of people rally in support of the Ukraine outside the Manitoba Legislature in Winnipeg Saturday, February 26, 2022. The group was rallying against the Russian invasion of The Ukraine. Photo by John Woods/The Canadian Press

Ottawa is warning that Canadians who decide to fight for Russia in Ukraine could face severe consequences, even as it acknowledges for the first time uncertainties about whether it is legal to bear arms for the Ukrainian side.

Deputy Prime Minister Chrystia Freeland delivered the warning to anyone contemplating joining the Russian military invasion of Ukraine on Thursday as she announced more Canadian sanctions on Moscow and support for Kyiv in response to that attack.

Asked at a news conference whether Canadians who pick up arms for Russia would be prosecuted, Freeland said: “We are very clear that this war is illegal. And Canada will take a very appropriately severe view of anyone who is fighting this war.”

Yet federal ministers appeared less confident about the legality of fighting for Ukraine, whose government appealed last weekend for foreign volunteers to join an “international brigade” to help defend the country from Russia.
Numerous Canadians have since said they plan to answer the call to arms, with some having already flown overseas.

Appearing alongside Freeland, Defence Minister Anita Anand told reporters that while she understood the desire that many Canadians have to bear arms for Ukraine, “the legalities of the situation are indeterminant at this time.”

The federal government had previously avoided directly addressing the legality of Canadians fighting in Ukraine, or whether it supports those who want to do so. Federal ministers instead couched the issue as a matter of personal risk.

That stood in stark contrast to the United Kingdom and Australia, whose governments have noted the potential legal issues that their citizens could face if they fight in a conflict that does not involve their countries.

Anand instead encouraged people to enlist with the Canadian Armed Forces, which has launched a new recruitment drive as it struggles with a shortfall of thousands of active service members while facing growing demands at home and abroad.

“If there are Canadians who are interested in the Armed Forces, the Canadian Armed Forces is currently recruiting,” said Anand, who worked as a lawyer and legal scholar at the University of Toronto prior to entering politics.

“And we would very much welcome applications from across the country to the Canadian Armed Forces, where we have had a training mission in Ukraine since 2015 and have trained over 33,000 Ukrainian soldiers.”

Prime Minister Justin Trudeau later sidestepped a similar question about the legality of Canadians fighting for Ukraine, referring back to the government’s previous warnings about the risks of travel in Ukraine before adding that he was not a lawyer.

While Freeland did not say whether Canadians who fight for Russia could be prosecuted, author and historian Tyler Wentzell suspected federal lawyers are now taking a hard, long look at the Foreign Enlistment Act and how it can apply today.

Russians, Belarusians out of Paralympics amid boycott risk

Surprising me with his ex was terrible. How can I get through to him? Ask Ellie

Surprising me with his ex was terrible. How can I get through to him? Ask Ellie