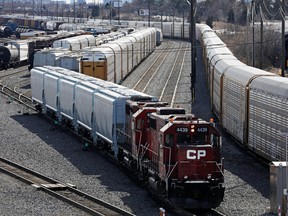 Canadian Pacific Railway Ltd will resume operations on Tuesday as it agreed to settle a labour dispute with the union representing its conductors and engineers through arbitration, averting more pain to firms battling supply-chain disruptions.

The railroad said the agreement with Teamsters Canada Rail Conference ends the work stoppage that began early Sunday when it locked its workers out over a dispute on pensions, pay and benefits.

That sparked calls for quick negotiations over fears it could aggravate a shortage of commodities caused by Russia’s invasion of Ukraine.

Canada is the world’s biggest producer of potash, a key ingredient for producing nitrogen-containing fertilizers, followed by Russia and Belarus.

A binding arbitration typically involves an employer and a union presenting their demands before an independent arbitrator, whose decision on contract terms is final.

“While arbitration is not the preferred method, we were able to negotiate terms and conditions that were in the best interest of our members,” union spokesperson Dave Fulton said.

Canada’s Minister of Labour Seamus O’Regan Jr, who mediated the talks, said normal operations will continue at CP during the arbitration period.

The agreement comes as global supply chain woes hamper the rail sector and industries that depend on it to transport everything from cars to coal.

“We are obviously relieved but even a strike of short duration has impacts and is costly,” Chief Executive of the Mining Association of Canada Pierre Gratton said.

Canada depends heavily on rail to move commodities and manufactured goods to ports. CP’s network runs across much of southern Canada and extends as far south as Kansas City in the United States.

“Rail should be deemed an essential service under the Canada Labour Code and subjected to binding arbitration to resolve disputes in all cases,” Western Grain Elevator Association, the organization that handles a bulk of Canada’s bulk grain export, said.

Are e-cigarettes a gateway to weed?

Are e-cigarettes a gateway to weed?