Our ancient ancestors invented the handle nearly 500,000 years before the wheel, marking a leap in technological and cognitive abilities 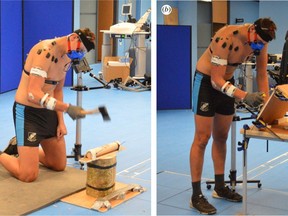 Volunteer’s movements and oxygen level is tracked while using ‘hafted’ tools. Photo by University of Liverpool

Could the humble handle be an invention greater than the wheel?

According to University of Liverpool researchers, adding handles to stone tools increased their function and required less effort when scraping, chopping and hammering.

The handle’s emergence 500,000 years ago, according to the study, marked a technological leap that may have “shaped human social, cognitive and biological capabilities”. (For comparison, the wheel was invented 6,000 years ago.)

“The transition from hand-held to hafted tool technology marked a significant shift in conceptualizing the construction and function of tools,” they write.

Hafted tools, such as scrapers and axes, are made up of component parts that add up to a more useful whole, contributing to cognitive skills that corresponded with “development of language and extended planning,” the researchers add. Researchers cite a 2015 published in the Journal of Archaeological Science, that found late Middle Palaeolithic flake cleavers were more effective than hand-held cleavers in “tree felling and carcass butchery tasks as measured by number of blows and time required.”

It’s widespread implementation is also thought to have shaped the functionality of our upper limbs:

“It is assumed that addition of a handle improved the (bio)mechanical properties of a tool and upper limb by offering greater amounts of leverage, force and precision.”

The researchers carried out experiments with 40 volunteers of 24 men and 16 women, each of whom were given a range of tools to try. This included a chopping tool (a hatchet with a steel head and wooden handle) and a shave hook for scraping.

The hatchet was used to chop off as much wood as possible from a 6 cm-thick wooden dowel in under 5 minutes, while the scraper was used to scrape out the fibres from a carpet with a thickness similar to that of animal hide.

It concluded “The energetic and biomechanical benefits of hafting [adding handles] arguably contributed to both the invention and spread of this technology.

“These reductions in physiological and biomechanical demands, as well as demands on energy and time budgets, would enhance both individual and group survival.”