Most of Canada now running for Conservative leader 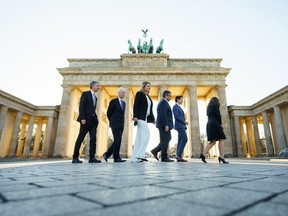 This Abbey Road-esque photo in front of Berlin’s Brandenburg Gate was recently posted to the official Twitter account of Foreign Affairs Minister Mélanie Joly. Although it looks like the Canadian delegation is walking somewhere important, there aren’t really any notable German government offices in the direction they’re facing. Photo by Mélanie Joly/Twitter

Prime Minister Justin Trudeau is now on the final leg of his European tour intended to strengthen NATO and otherwise check up on a continent descending into war. But it’s a worthwhile question to ask what Trudeau has actually accomplished in the Old World. Here’s a summary of what the prime minister hasn’t done ….

And it’s worth noting that every other main player in the Ukraine crisis has strenuously avoided leaving their capital city. Ever since the Russian invasion began on Feb. 24, Trudeau is really the only NATO leader who has journeyed outside his own borders.

Today in Poland, Prime Minister @MorawieckiM and I spoke about Russia’s unwarranted and unjustifiable war against Ukraine – as well as our coordinated efforts to respond to these brutal attacks, and Poland’s work to welcome Ukrainian refugees. pic.twitter.com/5I9fatisym

All that said, there are perfectly legitimate reasons for Trudeau to simply show his face around Europe at a time of crisis. National Post columnist Matt Gurney called it “showing the flag”; Trudeau entrenches Canada’s usual friendships and alliances just by “being present.” After all, Stephen Harper did this kind of stuff all the time: Harper’s annual Arctic tour was similarly little more than a series of photo ops with the subtext of sticking it to Vladimir Putin.

Jean Charest, the 63-year-old former Quebec premier who hasn’t touched federal politics since the days of Brian Mulroney, is now officially a candidate for the Conservative Party of Canada. In a not-tremendously-high-energy video posted to Twitter, Charest invited Conservatives to line up behind his “built to win” team.