Over the weekend, an official Russian source said that the shipments of military aid flooding into Ukraine from the west are “legitimate targets” for the Russian Armed Forces. 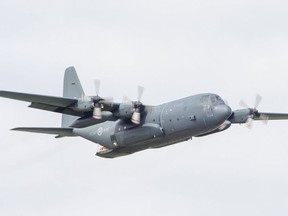 A Canadian Forces Hercules C-130 pictured in 2020. Two of these aircraft are now in Europe to assist in supplying Ukraine. Russian sources are now saying that incoming convoys of supplies to Ukraine, even if they come from NATO countries, are a “legitimate target” for the Russian military. Photo by Derek Ruttan/The London Free Press/Postmedia Network

Over the weekend, an official Russian source said that the shipments of military aid flooding into Ukraine from the west are “legitimate targets” for the Russian Armed Forces. “We have warned the U.S. that pumping weapons into Ukraine by a whole range of countries is not just a dangerous path but are actions that turn these convoys into legitimate targets,” Deputy Foreign Minister Sergei Ryabkov said Saturday on state television.

What this means is that Russia has effectively said it’s okay for them to shoot down Canadian military planes. Because, among the air bridge of western nations scrambling equipment into Ukraine right now are RCAF cargo jets.

We got a bonna-fidee air bridge happening here, boys pic.twitter.com/HVmN5CWNON

In a CBC interview last week, NATO Secretary General Jens Stoltenberg warned Russia against making any attacks over NATO territory. While acknowledging that the rules are different for “supply lines inside Ukraine,” he added “an attack on NATO territory, on NATO forces, NATO capabilities, that would be an attack on NATO.”

And according to military analysts, all that Western-shipped military gear – particularly the anti-tank missiles – is indeed turning the course of the war against Russia.

Ukrainian President Volodymyr Zelenskyy delivered a live speech to the House of Commons on Tuesday – making Canada the third foreign parliament that Zelenskyy has addressed after the European Parliament and the U.K. House of Commons. Most of the speech was spent with Zelenskyy attempting to illustrate the gravity of the conflict through a Canadian context: How would Canadians feel if their cities were under siege, their monuments were being destroyed, foreign countries were ignoring their calls for help and the maple leaf was being swapped out for the Russian tricolour.