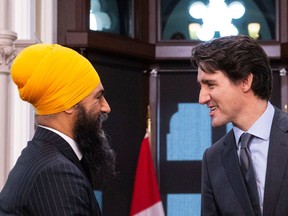 This photo is actually from an inconsequential meeting that Trudeau and Singh held in 2019. But expect to see it virtually everywhere for the next little while (including on almost every conceivable piece of Conservative advertising). Photo by THE CANADIAN PRESS/Sean Kilpatrick

Here’s a few times when NDP Leader Jagmeet Singh didn’t have the nicest things to say about his rival, Liberal Leader Justin Trudeau …

So it’s a little surprising that the NDP just struck a deal to keep Trudeau in power until at least 2025. Specifically, if a confidence motion comes before the House (and the Liberals love turning votes into confidence motions) the NDP have promised to always vote yes.

What was the price of the NDP signing off on three more years of Trudeau? They don’t get any cabinet positions, but they do get these …

I’ll have much more to say but right now all I can think is: God help us all. https://t.co/f9GhafXzpD