Police estimated the crowd at around 500,000 people — one of the largest gatherings in Israel’s history. 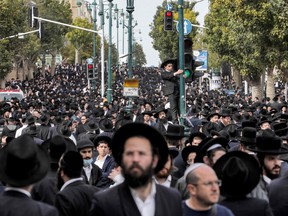 Ultra-Orthodox Jewish mourners gather to attend the funeral of Haredi rabbi Chaim Kanievsky in the Israeli city of Bnei Brak near Tel Aviv, on March 20, 2022. Photo by Gil Cohen-Magen /AFP via Getty Images

Half a million mourners attended a funeral in Israel for an ultra-Orthodox rabbi.

The roads of Bnei Brak, a Tel Aviv suburb, were filled with men and boys in black suits mourning  Belarusian-born Chaim Kanievsky, who died Friday at age 94, according to the New York Post.

Police estimated the crowd at around 500,000 people — one of the largest gatherings in Israel’s history.

Kanievsky, born in what is now Belarus, was the de facto head of what is commonly called the Lithuanian branch of ultra-Orthodox Judaism, and his knowledge of Jewish law was so revered that his rulings were thought to require total compliance within his community, according to the New York Post.