Heather Morgan is accused by the U.S. Justice Department of helping to launder one of the biggest thefts in Bitcoin history. 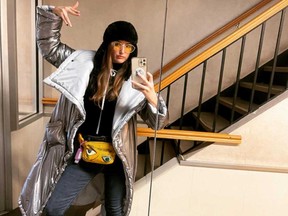 Heather Morgan, who raps under the name Razzlekhan, accused by the U.S. Justice Department of helping to launder one of the biggest thefts in Bitcoin history. Photo by razzlekhan /Instagram

WASHINGTON — Heather Morgan is a would-be corporate influencer who raps about entrepreneurship, designs handbags inspired by ketchup squirts, and signs off from her motivational YouTube videos with the words “razzle-dazzle.”

She and her husband Ilya “Dutch” Lichtenstein have been accused by the U.S. Justice Department of helping to launder one of the biggest thefts in Bitcoin history.

The indictment of Morgan and Lichtenstein on allegations of cashing out some of the billions in stolen Bitcoin highlighted the U.S. government’s crackdown on cryptocurrency crimes.

Both New Yorkers are scheduled to make their initial appearances in federal court Tuesday at the U.S. District Court for the Southern District of New York. They face charges of conspiring to commit money laundering as well as to defraud the United States. The case was filed in a federal court in Washington, D.C.

It was unclear who will be representing the couple in the criminal case. Calls and messages left for Morgan and Lichtenstein have not been returned.

The pair is accused of conspiring to launder 119,754 bitcoin stolen after a hacker broke into Bitfinex and initiated more than 2,000 unauthorized transactions. Justice Department officials said the transactions at the time were valued at $71 million in Bitcoin, but with the rise in the currency’s value, it is now valued at over $4.5 billion.

A key clue may have come from the 2017 bust of an underground digital market used to launder a portion of the funds. U.S. officials said some of the money was transferred to AlphaBay, an anything-goes version of eBay hosted on the dark web.

When the site was taken down, it likely allowed authorities to access AlphaBay’s internal transaction logs and connect them to a cryptocurrency account in Lichtenstein’s name, according to digital currency tracking company Elliptic.

Bitfinex said in a statement it was working with the Department of Justice to “establish our rights to a return of the stolen bitcoin.”

Lichtenstein and Morgan also tried to launder money via a network of currency exchanges or claimed that the money represented payments to Morgan’s startup, the Department of Justice said. Prosecutors said on Tuesday the illegal proceeds were spent on things ranging from gold and non-fungible tokens to “absolutely mundane things such as purchasing a Walmart gift card for $500.”

The couple had active public profiles, especially Morgan, as rap singer “Razzlekhan,” a pseudonym she said on her website referred to Genghis Khan “but with more pizzazz.”

Morgan also had sidelines in the painting, fashion design, and writing worlds, where she pitched herself as a kind of corporate coach. One of her recent pieces was titled, in part, “Tips to Protect Your Business from Cybercriminals” and featured an interview with a cryptocurrency exchange owner about how to prevent fraud.

What’s the best juicer to buy? Turn your favourite veggies into the freshest drinks with these expert-approved machines