After Russian forces on Sunday took control of Lysychansk, Ukrainian officials said they now expect Moscow to focus its efforts on the cities of Sloviansk and Kramatorsk in Donetsk 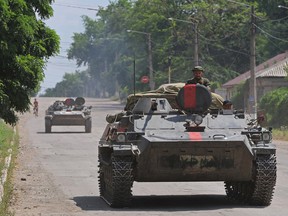 Service members of pro-Russian troops ride an infantry fighting vehicle during Ukraine-Russia conflict in the city of Lysychansk in the Luhansk Region, Ukraine July 4, 2022. Photo by ALEXANDER ERMOCHENKO /REUTERS

SLOVIANSK — Russian troops are engaged in heavy fighting supported by widespread artillery fire as they launch a major offensive for Ukraine’s Donetsk region, Ukrainian officials said, a day after Moscow declared victory in the neighboring province of Luhansk.

Donetsk and Luhansk comprise the Donbas, the industrialized eastern part of Ukraine that has seen the biggest battle in Europe for generations. Russia says it wants to wrest control of the entire Donbas from Ukraine on behalf of Moscow-backed separatists in two self-proclaimed people’s republics.

After Russian forces on Sunday took control of Lysychansk, the last bastion of Ukrainian resistance in Luhansk, Ukrainian officials said they now expect Moscow to focus its efforts especially on the cities of Sloviansk and Kramatorsk in Donetsk.

There was heavy fighting at the edge of the Luhansk region, its governor Serhiy Gaidai told Ukrainian television, saying Russian regular army and reserve forces had been sent there in an apparent effort to cross the Siverskiy Donets River.

“They are sustaining quite heavy losses,” Gaidai said.

“Some battalions have been moved there to make up the numbers they need….They are not taking all their wounded with them. The hospitals are full to bursting as are the morgues.”

“There is still a great deal of shelling in both Luhansk and Donetsk regions. They are shelling everything in their path.”

Reuters could not independently verify his comments.

A Reuters reporter at the scene saw yellow smoke billowing from an auto supplies shop, and flames engulfing rows of market stalls as firefighters tried to extinguish the blaze.

Donetsk regional governor Pavlo Kyrylenko said Sloviansk and nearby Kramatorsk had suffered heavy shelling overnight. “There is no safe place without shelling in the Donetsk region.”

Russian President Vladimir Putin launched the invasion of Ukraine on Feb. 24, calling it a “special military operation” to de-militarize the country, root out nationalists and protect Russian speakers.

Kyiv and the West say Russia is waging an unprovoked, imperial-style land grab in its fellow ex-Soviet republic, and accuse Moscow of war crimes.

Lysychansk, once a city of a 100,000 people, lies in ruins. Buildings are scorched and holed by shells, cars up-ended and streets strewn with rubble, testament to the ferocity of the battle it endured.

50 kilos of cocaine seized in search of truck at Aldergrove crossing: CBSA