Hamilton Police homicide Det- Sgt. Jim Callender confirmed that the 28-year-old would be escorted by city detectives from Budapest, Hungary, where Karafa has been caged since last July. 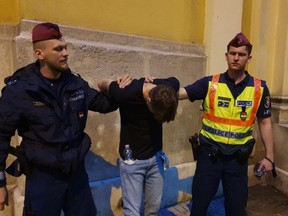 Oliver Karafa, 28 (seen here), and aspiring “influencer” Yun (Lucy) Lu Li, 25, were arrested in Budapest, Hungary on June 12 for a double shooting in Stoney Creek, Ont., on Feb. 28, 2021, that killed Tyler Pratt, 39, and injured his 26-year-old pregnant fiancee so badly that she lost their unborn child. Photo by Handout /BRFK

Accused Millennial Bonnie and Clyde killer Oliver Karafa will be back in Canada by the end of the week, the Toronto Sun has learned.

Hamilton Police homicide Det- Sgt. Jim Callender confirmed that the 28-year-old would be escorted by city detectives from Budapest, Hungary, where Karafa has been caged since last July.

“I can confirm that Oliver Karafa will be back in Canada before April 1, 2022, barring any unforeseen issues,” Callender told the Sun.

Karafa had bitterly fought extradition to Canada, claiming the cops were corrupt, his life would be in danger in Hamilton’s notorious Barton St. Jail, and myriad other complaints. A Hungarian court torpedoed the rich kid’s woe-is-me gambit.

“All this ‘evidence’ cannot be considered even in itself as objective, reliable, accurate, and sufficiently up-to-date information on the conditions of detention [in Canada],” a judge wrote in January, upholding a lower court decision to give Karafa the boot.

The flight home — expected to arrive late Wednesday or early Thursday — closes the first chapter of a saga that made headlines around the planet.

It began on Feb. 28, 2021, when a British Columbia man named Tyler Pratt, 39, and his 26-year-old pregnant girlfriend were gunned down in an industrial area of Stoney Creek.

Pratt didn’t make it. His girlfriend survived but lost her baby in the gunfire.

Why they were meeting at the lonely address on a chilly February evening remains unclear. But now a man was dead.

Within 24 hours, Callender and his team of detectives had zeroed in on two suspects — Karafa and his alleged accomplice and gal pal, influencer Yun “Lucy” Lu Li, 27. The problem was that the selfie-loving pair had fled the country to Eastern Europe where his parents live.

First, they arrived in Prague, then slithered their way to Slovakia before deciding for some reason to visit Budapest. There, on June 12, Hungarian bounty hunters cornered the pair in a tourist hotspot and arrested them.

Li — the daughter of a prominent businesswomen with Liberal connections — quickly waived extradition and was returned to Canada last July. She was released into the custody of her mom with bail of more than $2.7 million supplied by her family and two others.

In a Budapest court, it emerged that Karafa was the accused triggerman who allegedly cut down Pratt and his girlfriend.

Karafa and Li are charged with first-degree murder and attempted murder. None of the charges have been proven in court.

And now, the scrawny millennial will soon be on his way home to face justice. It will not be his first dance with the rodeo known as the Canadian justice system.