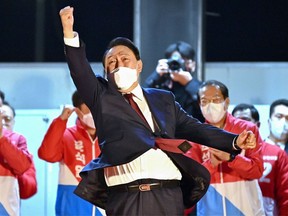 South Korea’s new president-elect Yoon Suk Yeol (C) of the main opposition People Power Party gestures to his supporters as he is congratulated outside the party headquarters in Seoul on March 10, 2022. Photo by JUNG YEON-JE/AFP via Getty Images

The internet was abuzz with pleas to immigrate to Canada after conservative candidate Yoon Suk-yeol, dubbed K-Trump, was elected the new president of South Korea on Thursday.

The newly elected president led many Koreans to flood Twitter with almost 16,000 “immigration to Canada” tweets, making it a trending topic throughout the day.

Former top prosecutor Suk-yeol beat liberal ruling party candidate Lee Jae-myung by less than one per cent, making it one of the closest presidential elections in recent history.

Suk-yeol drew criticism throughout his campaign for making outlandish statements.

“Workers should be allowed to work 120 hours a week and then take a good rest,” said Suk-yeol, adding the system should allow for more flexibility for those who need to work longer hours during peak periods.

Individual choice to wear or not wear a mask, says Ford

Individual choice to wear or not wear a mask, says Ford