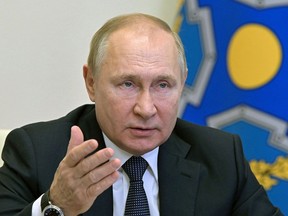 (Bloomberg) — Vladimir Putin warned he would cleanse Russia of the “scum and traitors” he accuses of working covertly for the U.S. and its allies.

Facing economic meltdown three weeks into his invasion of Ukraine, the Russian leader lashed out at domestic critics in a televised video conference with dark undertones where he accused the West of wanting to destroy Russia.

“Any people, and particularly the Russian people, will always be able to tell apart the patriots from the scum and traitors and spit them out like a midge that accidentally flew into their mouths,” Putin said.

He went further: “I am convinced that this natural and necessary self-cleansing of society will only strengthen our country, our solidarity, cohesion and readiness to meet any challenge.”

The outburst came two days after a producer at Russia’s state-run Channel One interrupted the news with a rare public protest against the war in Ukraine. Marina Ovsyannikova briefly held up a sign behind the news anchor saying: “They’re lying to you.”

“I am not at all judging those who have a villa in Miami or the French Riviera, who cannot do without foie gras, oysters or so-called gender freedoms,” he said. “This is what they think — in their opinion — a sign of belonging to a higher caste, to a higher race.”

Putin said those expatriates are “ready to sell their own mother,” because their sympathies lie with the West.

“Mentally located precisely there, and not here, not with our people, not with Russia,” he said.

Russia calls its assault on Ukraine a “special military operation” to protect breakaway Ukrainian regions from what it claims is a fascist regime in Kyiv and insists it’s only targeting military installations. Still, the shelling in Ukraine has hit residential areas of cities and caused civilian casualties, with the southern city of Mariupol under a virtual siege for several weeks now.