Rudyk is part of the civilian resistance in Ukraine ready to fend off the Russian invaders: ‘I know how to shoot a rifle’ 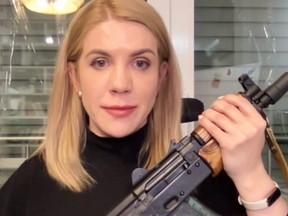 I met Kira Rudyk in 2017 in Kyiv. She was 32 and already the chief operating officer of an IT company that employed hundreds of software engineers and architects. We became friends. She’s smart and funny and we have shared many dinners and laughs over the years, as we worked together on a software development project and as I wrote about abuses and anti-corruption causes in Ukraine.

In 2019, she was approached by a new, progressive anti-corruption political party called Holos (The Voice) and ran successfully for a seat in Ukraine’s parliament. She became her party’s leader in no time and we regularly discussed strategies, communications efforts and media. Now she is hunkered down in Kyiv, her large house full of volunteers, preparing to fend off the Russian invaders. We talk regularly and I spoke with her last week via Zoom to discuss what life’s like in a war zone.

“There are 30 men living in my house and another one I rented next door. We are officially part of our army and resistance. I know how to shoot a rifle. We train two hours a day,” she said, then joked “it’s a good workout but my manicure is totally ruined by putting the bullets in.”

The group has one month’s provisions and is volunteering at hospitals or wherever help is needed. “My life is about getting used to sirens. I’m super experienced living under the shelling. I know when they are closer or farther or when they are the real deal or when they are nothing. I can hear them when I’m asleep and have taped my windows so that glass won’t shatter everywhere inside. Even my cat is used to this,” she said.

Just before the invasion, she attended the Munich Security Conference 2022, and found it a surreal experience. “There were fancy dinners, champagne, oysters, and lots of talking about how Putin was definitely not going to attack. I was upset. The West was not doing enough and why weren’t there sanctions imposed to prevent an invasion, I would ask? I was annoyed. It was like being on the Titanic without the orchestra. I went back to Kyiv and the day before the invasion we passed legislation in parliament all day, then at 5 a.m. he attacked. My first thought was `no pilates today’ then I went to parliament, at 7 a.m. we voted to create martial law and after that I went to the police station to get myself a rifle.”

Kira was born in Ukraine, but at age 10 her mother took her and her sister to the United States to live with an aunt. She attended high school there, but went back to Ukraine and established a successful career building technology start-ups. Her American-based family is distraught that she’s there, but Kira says “this is my choice. I’m stubborn and there is no discussion after the decision has been made.”

She is in charge of her group which is part of a self-defence team. Some of her friends and associates have decided to leave. “I’m on Putin’s kill list,” she said, “but I’m doing what I can, doing interviews with the media and helping out the city as we prepare for a siege.”

She estimated that more than the half the city has fled, but the rest are prepared to fight in the streets. “We need jets and a no fly zone. We will need some protection at some point. But NATO’s impotent.”