The lawsuit alleges that birth alerts are motivated by “discriminatory and harmful stereotypes about the parenting capabilities of persons of certain backgrounds.” 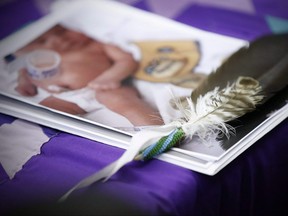 A proposed class action has been filed against Manitoba government by a woman who had her newborn removed by police and social workers in a video broadcast live on social media. An eagle feather and a baby hospital ID bracelet sit on a photo of a newborn baby during a news conference in Winnipeg on Friday, Jan. 11, 2019, in support of the mother whose newborn baby was seized from hospital by Manitoba’s Child and Family Services. John Woods/Canadian Press Photo by John Woods /Canadian Press

An Indigenous woman whose newborn was taken by police and social workers shown in a video broadcast live on social media has proposed a class-action lawsuit against the Manitoba government.

The woman says in a statement of claim filed this week that birth alerts are unlawful, breach charter rights and cause significant harm to mothers and children.

“There was a feeling I had that this isn’t right,” the mother said Thursday in an interview with The Canadian Press. “The betrayal.”

The Canadian Press is not identifying the mother so as not to identify the child.

A video in 2019 of the two-day-old infant’s apprehension at a Winnipeg hospital caused significant public outcry. The broadcast on Facebook showed the mother weeping nearby before officers took the baby away in a car seat.

She only learned she was subject to a birth alert when authorities showed up at the hospital to take the child, the court documents said.

The mother said she felt completely blindsided and manipulated when she learned the alert had been placed on her for seeking help before giving birth.

About two months after the baby was taken, guardianship was transferred to the aunt. Court documents say the woman remains in her baby’s life and cares for her on a regular basis.

The province said Thursday it was unable to provide comment on the lawsuit because the matter is before the court.

The mother said many other Indigenous mothers approached her after seeing the video and told her they had been through a similar experience. She said she realized she wanted to do something to ensure what happened to her wouldn’t happen again.

“I feel like it’s my job to help put an end to this, to help make it right for the mother, for the child, and hopefully for the system all together — because this is not right.”

The mother is represented by Alisa Lombard, a Saskatchewan-based lawyer who also worked on a class action involving Indigenous women who alleged they were forcibly sterilized.

Birth alerts have long been criticized by Indigenous leaders who say the practice is stacked against their families. The final report of the National Inquiry into Missing and Murdered Indigenous Women and Girls said the alerts are “racist and discriminatory and are a gross violation of the rights of the child, the mother, and the community.”