At least 14 rented private planes have departed from Moscow and landed at Israel’s Ben Gurion Airport in the past 12 days, reports say 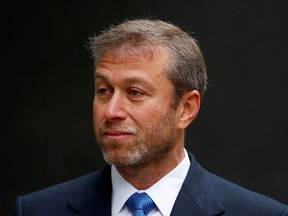 Russian billionaire and owner of Chelsea football club Roman Abramovich arrives at a division of the High Court in central London October 31, 2011. Photo by Andrew Winning/Reuters

TEL AVIV — As the West squeezes Russia’s economy over its war in Ukraine, Israel says it is working to prevent Moscow’s oligarchs, some of whom also hold Israeli passports, from showing up and turning the country into a haven for sanctions evasion.

The most visible among them is Roman Abramovich, the former owner of the Chelsea Premier League soccer team, who has Israeli citizenship and was sanctioned by the United Kingdom last week. His private jet landed at Israel’s Ben Gurion Airport on Sunday night, according to Israeli media.

In the weeks since the invasion of Ukraine began, the Foreign Ministry formed a task force to investigate the influence some Russian businessmen, including those with alleged ties to the Kremlin, have in Israel. Foreign Minister Yair Lapid also warned his fellow cabinet members last month against granting the oligarchs favours, saying such a move would cause diplomatic damage, according to an official present at the meeting, who spoke on the condition of anonymity because of the sensitivity of the topic.

Israel’s Channel 12 News reported last week that the government plans to limit the amount of time private planes and yachts are allowed to stay at Israeli airports and docks to just 48 hours. The move comes as a flurry of rented private jets departing Russian cities and bound for Tel Aviv raised speculation that Moscow’s well-heeled elite are fleeing for Mediterranean shores.

At least 14 rented private planes have departed from Moscow and landed at Israel’s Ben Gurion Airport in the past 12 days, Channel 12 News reported Saturday. Western nations, including Britain, the United States and European Union, have all imposed sanctions on some of Russia’s most prominent businessmen.

“Some of them have arrived, not with their own planes, and are staying at the houses of their spouses, their friends,” Elise Brezis, director of the Azrieli Center for Economic Policy at Bar-Ilan University in central Israel, said of the Russian oligarchs landing in the country. Last week, she led what she said was a tense meeting with representatives from Israel’s Finance Ministry, the Bank of Israel and other government offices and financial institutions over how to handle the presence of Russian oligarchs in Israel.

A number of wealthy Russian Jews applied for Israeli citizenship after Russia annexed Crimea from Ukraine in 2014, in part to evade resulting U.S. sanctions. In Israel, they benefited from a law exempting new immigrants from declaring or paying taxes on their income for 10 years. The law was used as a loophole for international money laundering and transformed seaside cities such as Tel Aviv, Caesarea and Herzliya into playgrounds for the ultrarich.

These businessmen — including Abramovich and billionaire banker Mikhail Fridman — not only have Israeli passports, but also often own luxury villas and maintain political ties and status as high-level donors and investors in the Israeli economy.

Abramovich, who was placed last week on a U.K. government sanctions list, acquired Israeli citizenship in 2018 and became one of the largest donors to Israeli and Jewish organizations. In late February, as Russian troops encroached on Ukraine’s borders, Abramovich made an “eight-figure” donation to Yad Vashem, Israel’s official Holocaust memorial and museum, according to the organization’s chairman, Dani Dayan.

Matsuyama out of Players Championship with back injury