Straschnitzki, who is hoping to excel at sledge hockey, has been working with a doctor and physiotherapist from Thailand. 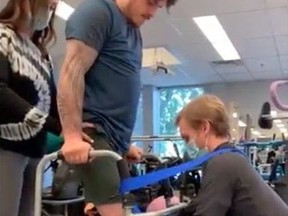 A former junior hockey player with life-altering injuries from a bus crash four years ago is getting a boost he’s been anticipating for two years.

Ryan Straschnitzki, 22, is one of four individuals with spinal cord injuries who are in Calgary this week to have the epidural stimulators in their spines reprogrammed.

Straschnitzki was paralyzed from the chest down when a bus carrying the Humboldt Broncos of the Saskatchewan Junior Hockey League was in a collision with a transport truck in 2018. Sixteen people were killed and another 13 were injured.

He had the epidural stimulator implanted in his spine in Thailand in 2019. The device, which resembles a smartphone, sends electrical currents to the spinal cord to try to stimulate nerves and move limbs.

A planned upgrade — complete with mapping of the complex interaction between nerves and muscles — was delayed for two years because of the global COVID-19 pandemic.

“I’m just happy they finally made it. It’s just about finding new things that work, because over time your body gets adapted to certain stimulation,” Straschnitzki said in an interview with The Canadian Press on Tuesday.

“It’s incredible. I’ve been able to keep my body healthy and my legs healthy for the chance I do walk again,” he said. “I think it’s going to be more successful (than) if I didn’t have the treatment done.”

“Sometimes when the (stimulator’s) set to a certain level, I can feel it kind of vibrating and clenching my body, so it’s overpowering, and there’s times when I don’t feel anything at all, so it’s about finding that happy medium.”

Since his return from Thailand, Straschnitzki has been able to stand on his own and take a few steps with a walker.

Dr. Richi Gill, a Calgary surgeon, broke his neck in a freak accident on a body surfboard during a family vacation in Hawaii four years ago. He said his implant has allowed him to take assisted steps and regulate his blood pressure, but it’s in need of maintenance.

“I can tell some of the programs I’ve had don’t work very well right now and need to be updated,” Gill said.

He also understands the technology still has a way to go.

“The biggest limitation is just the hardware of the technology. It can only do so much, because it hasn’t been further adapted for this purpose. This is kind of like the flip-phone version.”

MaryLou Harrigan: Fifty-six per cent of Canadians are concerned about developing Alzheimer’s

MaryLou Harrigan: Fifty-six per cent of Canadians are concerned about developing Alzheimer's