The investigation alleges Dias gave Chris MacDonald half of a $50,000 sum Dias received from a COVID-19 rapid test supplier 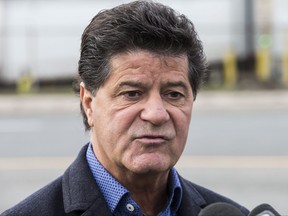 Ex-Unifor national president Jerry Dias was turned in for allegedly violating the union’s code of ethics by his assistant Chris MacDonald, the union said Friday.

In a letter to union members, the national executive said MacDonald was being identified as the complainant “with his permission.”

The union noted an independent external investigator determined MacDonald “to be a credible witness” and that “he did not engage in any breach of the Unifor constitution.”

MacDonald filed the complaint after Dias on Jan. 20 gave him half of a $50,000 sum Dias said he had received from a COVID-19 rapid test supplier, the investigation found. The probe determined Dias had promoted the tests to “various Unifor employers, either directly or through Unifor staff under his direction” in December and January.

After the complaint was received on Jan. 26, the union commissioned the external investigation, which it said Dias was asked to but did not participate in.

Dias took a leave from his Unifor position on Feb. 6 for “medical reasons,” only to abruptly retire on March 11. On March 14, the union revealed that it had launched an independent external investigation into an ethics complaint against Dias.

On Wednesday, Dias issued a statement saying he was entering rehab to deal with substance abuse issues for pain killers, sleeping pills and alcohol he used to deal with a sciatic nerve issue in December. “These factors have impaired my judgment in recent months, and I owe it to our members to seek the treatment I need,” he said.

That news came just minutes before the union executive announced they had charged him with violating the code of ethics.

The union executive also noted on Friday that “a news organization has come into possession of a medical document about Jerry Dias” and said they were not the source of the document.

The next step will be a hearing before the NEB (National Executive Board) where Dias will be given an opportunity “to fully present information and arguments concerning the charge,” the executive reiterated Friday.

Unifor is Canada’s largest union in the private sector, representing 315,000 workers including non-managerial editorial staff at the Toronto Sun.