Russia denies targeting civilians, describing its actions as a “special operation” to demilitarize and “denazify” Ukraine. 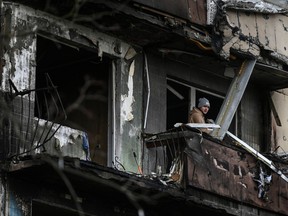 A man stands on the balcony of an apartment building after it was shelled in Kyiv on March 14, 2022. Photo by ARIS MESSINIS /AFP via Getty Images

LVIV — The United States warned China after “intense” talks on Monday against helping Moscow in its invasion of Ukraine, while an anti-war protester interrupted Russian state TV news in an extraordinary act of dissent.

Moscow has not captured any of the 10 biggest cities in Ukraine since beginning its incursion on Feb. 24, the most significant attack on a European state since World War Two.

It calls its actions a “special military operation” to “denazify” the country and has asked for military and economic aid from Beijing, according to U.S. officials.

Moscow denies that, saying it has sufficient resources to fulfill all of its aims. China’s foreign ministry labeled the reports on assistance as “disinformation.”

The seven-hour meeting was “intense” and reflected “the gravity of the moment,” according to a U.S. official.

The West is weighing how to deal with any involvement from China, top global exporter and No.1 foreign supplier of goods to Americans.

In Russia, a rare anti-war protest occurred in a studio during the main news program on state TV’s Channel One, which is the primary source of news for millions of Russians and closely follows the Kremlin line.

A woman held up a sign in English and Russian that said: “NO WAR. Stop the war. Don’t believe propaganda. They are lying to you here.”

The protester could be seen and heard for several seconds before the channel switched to a different report so she was no longer visible.

Moscow on Monday allowed the first convoy to escape besieged Mariupol, home to the worst humanitarian crisis of the conflict.