The mayors called on residents living on the street to seek shelter. 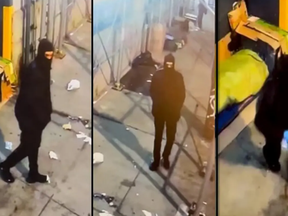 Images from NYPD of the man who is believed to have shot two homeless people in Lower Manhattan.

Police in New York City and Washington, D.C., are searching for a person suspected of shooting men experiencing homelessness in both cities.

Between March 3 and March 9, three men were shot in D.C., and one died.

This past weekend, at least two men were shot in New York City and at least one died, according to a joint statement from New York City Mayor Eric Adams and Washington Mayor Muriel Bowser.

“The work to get this individual off our streets before he hurts or murders another individual is urgent,” the mayors said in the statement. “The rise in gun violence has shaken all of us and it is particularly horrible to know that someone is out there deliberately doing harm to an already vulnerable population.”

The mayors called on residents living on the street to seek shelter.