Two students from Ontario are recovering in hospital following the deadly crash between a pickup truck and a van carrying a college golf team. 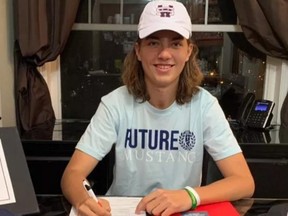 A 13-year-old was driving the pickup truck that collided with a van in Texas, killing nine people, including six members of a New Mexico college’s men’s and women’s golf teams and a coach, the U.S. National Transportation Safety Board said on Thursday.

“A 13-year-old child was behind the wheel of the pickup truck,” NTSB Vice Chairman Bruce Landsberg told a news conference, saying it appeared “that the left front tire which was a spare tire had failed, which resulted in the vehicle pulling hard to the left and crossing into the opposing lane.”

“It was very clearly a high speed head-on collision between two heavy vehicles,” he added.

A 2007 Dodge 2500 pickup being driven by the 13-year-old struck the 2017 Transit towing an eight-foot cargo trailer and carrying the coach and eight team members of the University of Southwest College golf team, Landsberg said.

Two students from Ontario are recovering in hospital following the deadly crash.

My husband blew up our happy family. How do I let that go? Ask Ellie