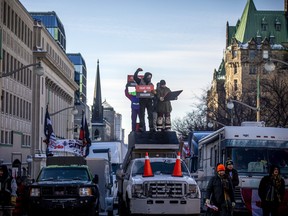 Protesters gathered around Parliament Hill and the downtown core for the Freedom Convoy protest that made their way from various locations across Canada, Sunday January 30, 2022. Photo by Ashley Fraser

And those vehicles could also find themselves being hauled away by provincially owned tow trucks, preventing future issues with blockade removals hampered by reluctant towing operators.

If passed, law enforcement will be able to direct owners and operators to remove their vehicles from illegal blockades, be able remove items used to illegally block roads, and be given the power to suspend both drivers’ licences and vehicle registration of participants.

The money will also go towards provincial procurement of what the government described as “critical equipment” — which according to a government source includes the purchase an undetermined number of tow trucks.

Last month, officials tasked with clearing blockades in downtown Ottawa and at land border crossings found few towing operators willing to haul away convoy vehicles — either out of solidarity for the movement or fear of harassment and reprisal from supporters.

Last month, Provincial Towing Association of Ontario President Mark Graves told The Canadian Press that the government needed to prove it was ready to protect the safety of towing companies ordered to clear blockades.

Police were able to compel companies to cooperate under measures introduced via Feb. 15’s invocation of the federal Emergencies Act — with many participating towing companies covering up company names and logos on their trucks — but Monday’s measures appear to be an attempt to bypass future delays caused by reluctant wreckers.

The measures, said a provincial government source, are meant to prevent future border blockades and discourage those from organizing or taking part in actions targeting Canada’s economy or the flow of international trade, while also protecting Canadians’ right to legally protest.

On Feb. 7, blockaders affiliated with the freedom convoy parked transport trucks and private cars along roads at the foot of the Ambassador Bridge in Windsor, Ont. for nearly a week — choking off over a quarter of Canada’s daily cross-border commerce with the United States, stalling billions of dollars in trade and idling automotive assembly plants in both nations.

The blockades also left lawmakers south of the border questioning the wisdom of American reliance on Canadian parts and assembly for the vulnerable automotive sector, already reeling from the effects of the ongoing global supply chain crisis.