In recent days, the young Russian influencers with powerful parents have been using their social media platforms to condemn the invasion, share anti-Putin and anti-war messages, all while praying for peace. 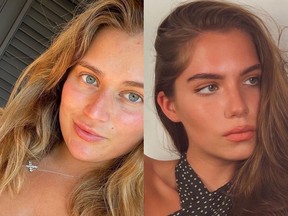 Rich kids in Russia are hoping for world peace and if they have to post sexy selfies on Instagram to do it, so be it.

Countries around the world have been against Russia’s invasion of Ukraine long before it began more than a week ago — but there are many within Russia who are also against the possibility of a full-blown war.

Now, as governments ramp up sanctions on Russia’s super-rich, targeting the assets of oligarchs who have amassed fortunes and political influence under Russian President Vladimir Putin, the wealthy’s children are using their influence for good.

No longer are their snaps showing them aboard their private yachts or half-naked or both — that is so pre-Feb. 24.

In recent days, the young Russian influencers with powerful parents have been using their social media platforms to condemn the invasion, share anti-Putin and anti-war messages, all while praying for peace.

The rich Russian rebels include the daughter of a football club-owning ogliarch, and the child of one of Putin’s most trusted advisors — and whose grandfather just happens to be a former Russian president.

Sofia Abramovich, 27, is the daughter of billionaire Roman Abramovich — the owner of Chelsea FC who has a reported net worth of $17.5 billion and is trying to quickly offload the team and millions worth in properties before his assets are frozen.

Elizaveta Peskova, the 24-year-old daughter of Kremlin spokesperson Dmitry Peskov, posted “No to war!” on her stories.

The post was reportedly removed less than an hour after it went up and her Instagram page has since been changed to private.

Maria Yumasheva is the daughter of Putin’s trusted adviser, billionaire Valentin Yumashev — who is the son-in-law of former Russian president Boris Yeltsin.

The 19-year-old has posted video to her Instagram stories showing her at an anti-war rally in London. She also has an image on her page of the Ukraine flag with the caption “No to war” and a broken heart emoji.