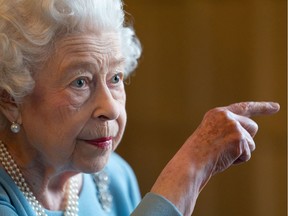 Britain’s Queen Elizabeth II gestures during a reception in the Ballroom of Sandringham House, the Queen’s Norfolk residence on February 5, 2022. Photo by JOE GIDDENS /POOL/AFP via Getty Images

Dave (Sabe) Courchene remembers first hearing in his early teens the story of how his grandfather met the Queen during her 10-day tour of Manitoba and the Northwest Territories in 1970.

It was his father and uncles who would explain how the meeting came to be and the risk his grandfather, David Courchene Sr., took when it came time to address her.

Courchene Sr. was there on behalf of the Manitoba Indian Brotherhood he co-founded in the 1960s. The younger Courchene said his grandfather presented his written speech to the event’s organizers, but was told he couldn’t read it.

“There were some things in there that, I guess, they didn’t want the Queen to hear,” said Courchene. “It upset him. There was no way they were going to change what he had to say, so he went ahead and presented what he had written.”

Courchene spoke about how he felt treaties were not being honoured in the way they were meant to be when the first one was signed in 1871, his grandson said.

He added that his grandfather spoke out, not to protest the Queen’s visit, but to engage in respectful dialogue about past and present mistreatment Indigenous Peoples faced.

Courchene said hearing the story instilled a sense of pride in him. “He was standing up for something that was an injustice, the way the Indigenous people were being treated. He stood up (and) he gave that voice.”

A CBC article published in 2020 about that 1970 visit said the Queen told Courchene she appreciated his words and recognized the destructive role colonization played and continues to play.

This year marks the Queen’s Platinum Jubilee. The 95-year-old has been on the throne for 70 years and is the world’s longest-serving monarch.

Nearly 25 years after Courchene gave his speech, the Queen would hear a similar one.

Bill Erasmus, a former Dene national chief, voiced his frustrations during her visit to Yellowknife in 1994. He said the federal government hadn’t honoured treaties signed by previous monarchs and that had “tarnished” the Indigenous relationship with the Crown.

“Our treaties are directly with the First Nations and the British Crown, and so it was very important for us to reconnect and to remind the Crown of the original provisions, the obligations, the promises and the spirit and intent behind the original treaties,” Erasmus said in a recent interview with The Canadian Press.

He suggested the meeting was significant because it helped educate Canadians.