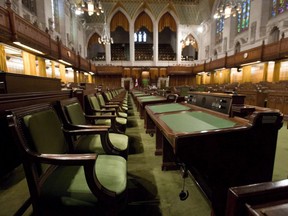 The House of Commons sits empty ahead the resumption of the session on Parliament Hill Friday September 12, 2014 in Ottawa. Photo by Adrian Wyld /THE CANADIAN PRESS

OTTAWA — The federal Liberals introduced privacy legislation on Thursday to give Canadians more control over how their personal data is used by commercial entities, impose fines for non-compliant organizations and introduce new rules for the use of artificial intelligence.

It’s the first major update in this policy area since before the advent of Facebook, Twitter or even Pinterest, a platform that Innovation Minister Francois-Philippe Champagne mentioned more than once at an afternoon news conference.

The proposed law, Bill C-27, is a much-anticipated step toward Champagne’s mandate to advance the digital charter, a series of principles intended to strengthen consumer privacy protections and guide the development of the digital economy.

He told reporters it is “one of the most stringent frameworks you would find among G7 nations,” with Justice Minister David Lametti adding: “We’re racing to the top.”

The bill, known as the Digital Charter Implementation Act, 2022, shares its name and the bulk of its provisions with a previous bill the Liberals introduced in late 2020, which did not become law.

Though some advocates were hoping for a more formal enshrining of privacy as a fundamental right, the updated bill’s preamble spells out that the protection of privacy interests is “essential to individual autonomy and dignity and to the full enjoyment of fundamental rights and freedoms,” and states an intention to align Canadian regulations with international standards.

It would create a Consumer Privacy Protection Act to increase Canadians’ control over their personal information and how it is handled by digital platforms.

That includes a requirement that companies obtain the consent of the individual whose information they are seeking, using plain language that the person “would reasonably be expected to understand.”

The personal information of minors is newly defined as “sensitive information,” and its deletion at their request or that of their parents would be subject to fewer exceptions.

Though the Liberal government’s earlier attempt at new private-sector privacy rules was criticized by some as too weak, the new version doesn’t go much further in the powers it affords the federal privacy commissioner.

The commissioner would be able to investigate complaints, order companies to comply and recommend fines should they fail to do so.