While the queen has previously felt conducting her work from Buckingham Palace helped with the smooth running of state affairs she will now adopt a “work from home” approach from Windsor Castle. 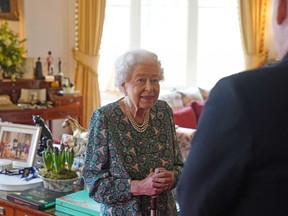 Queen Elizabeth will no longer live in Buckingham Palace.

The 95-year-old monarch and her late husband, Prince Philip – who died last April aged 99 – moved out of their London residence to isolate at Windsor Castle at the start of the coronavirus pandemic two years ago and she is said to have grown to enjoy her life there so is keen to settle permanently.

Her London residence is midway through a 10-year reservicing program and although the queen had planned to temporarily move out of her private apartments and relocate to another set of rooms in the palace while her quarters were renovated, she has now changed her mind.

“The reservicing does not end until 2027. While ongoing, it is not really a place to stay long-term,” a royal source told The Sunday Times newspaper.

While the queen has previously felt conducting her work from Buckingham Palace helped with the smooth running of state affairs and was important symbolically, she will now adopt a “work from home” approach from Windsor and will “predominantly” undertake her engagements there to reduce her travel.

She will return to London for occasional engagements but is believed not to have stayed at the palace since March 2020.

Royal author Hugo Vickers, who knows the queen, said: “Windsor is the place she loves. She has her memories with Prince Philip there, she has her ponies there and family nearby. It makes sense.”

Windsor is convenient for regular family visits from Princes Charles and William and Princess Anne, while Prince Andrew lives in Royal Lodge on the Windsor estate and Prince Edward and his wife Sophie, Countess of Wessex, are not far away at Surrey’s Bagshot Park.

The castle used to be used by the queen for weekend breaks and at Easter and during Royal Ascot in June, while she spends the summer at Balmoral in Aberdeenshire and Sandringham in Norfolk from December until February.