Russia gets Crimea, no NATO for Ukraine: Kremlin reveals its terms for peace

Russia gets Crimea, no NATO for Ukraine: Kremlin reveals its terms for peace 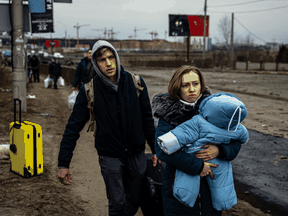 A woman carries her child as they flee the city of Irpin, northwest of Kyiv, on March 7, 2022. Photo by DIMITAR DILKOFF/AFP via Getty Images

When Vladimir Putin launched his war with Ukraine, he said he was doing so to “de-Nazify” the country, questioning its right to exist.

Only last week the Russian president had accused the country’s leadership, including its Jewish president Volodymyr Zelenskyy, of being a “band of drug addicts and neo-Nazis”.

On Monday, Dmitry Peskov, the Kremlin’s chief spokesman, offered Moscow’s terms to halt the invasion. If the original plan had been to conquer the whole of Ukraine, the terms of the new deal represent a significant retreat.

After 12 days of fighting, Putin’s war is not going to plan. Russia has failed to capture Kyiv, its convoy in the north is bogged down, and its troops are suffering major losses – though it could still regroup, Western officials say, and there is better progress in the south.

But Peskov, who has served as Putin’s spokesman for more than 20 years, said Russia would stop fighting “in a moment” if Ukraine were to meet its list of conditions.

Moscow may have decided – with economic sanctions crippling the country – that the war is better cut short; and that now is the time to pursue a peace deal on its terms. Or it may be a trap.

Ukraine may be obliged to reject the deal and Russia may step up its bombardment, claiming it had no other choice. Moscow’s demands are:

If the Kremlin had thought the might of the Russian military would knock off Ukraine in quick time, it was wrong. Peskov retreated from any suggestion that Putin had been making territorial claims on Ukraine. He said it was “not true” that Russia was demanding the whole of Ukraine be handed over and put under Kremlin control.

In an interview with Reuters, Peskov said: “We really are finishing the demilitarization of Ukraine. We will finish it. But the main thing is that Ukraine ceases its military action.”

Ukraine has suffered terrible losses with Russia targeting its densely populated urban areas. But only Kherson, of the major cities, has fallen. Kyiv will be dismissive of a ceasefire with the preconditions dictated by Russia.

Anatol Lieven, senior fellow with the Quincy Institute for Responsible Statecraft, questioned Monday what Peskov actually meant by “demilitarization”, adding: “If it means the abolition of the Ukrainian armed forces, then that’s completely unacceptable.”

But if it meant the withdrawal of long-range missiles from its soil, similar to the agreement that ended the Cuban missile crisis, then Prof Lieven said a deal might be possible.