Russia strikes military base near Polish border as it steps up its offensive, Ukraine says

Russia strikes military base near Polish border as it steps up its offensive, Ukraine says

Britain said the incident, just 25 km from the Polish border, marked a “significant escalation” of the conflict. 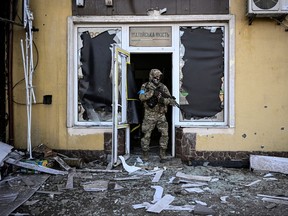 A Ukrainian serviceman exits a damaged building after shelling in Kyiv, on March 12, 2022. Photo by ARIS MESSINIS /AFP via Getty Images

LVIV — A barrage of Russian missiles hit a large Ukrainian base near the border with NATO member Poland on Sunday, killing 35 people and wounding 134, a local official said, in an escalation of the war to the west of the country as fighting raged elsewhere.

Russia’s defence ministry said the air strike had destroyed a large amount of weapons supplied by foreign nations that were being stored at the sprawling training facility, and that it had killed “up to 180 foreign mercenaries.”

Reuters could not independently verify the casualties reported by either side.

The attack on the Yavoriv International Centre for Peacekeeping and Security, a base just 15 miles (25 km) from the Polish border that has previously hosted NATO military instructors, brought the conflict to the doorstep of the Western defence alliance.

Russia had warned on Saturday that convoys of Western arms shipments to Ukraine could be considered legitimate targets.

“As a result of the strike, up to 180 foreign mercenaries and a large amount of foreign weapons were destroyed,” he said.

The 360-square km (140-square mile) facility is one of Ukraine’s biggest and is the largest in the western part of the country, which has so far been spared the worst of the fighting.

Ukraine, whose aspirations to join NATO are a major irritant to Russian President Vladimir Putin, held most of its drills with Western countries at the base before the invasion. The last major exercises were in September.

In the weeks before Russia’s Feb. 24 invasion, the Ukrainian military-trained there, but according to Ukrainian media all foreign instructors left in mid-February, leaving behind equipment.

“The dining room and dormitory were destroyed. So were the barracks,” said Colonel Leonid Benzalo, an officer in the Ukrainian medical reserve who was thrown across the room by one of the blasts. “The most important thing is we’re still alive,” he told Reuters after treating the wounded there.

While Western nations have sought to isolate Putin by imposing harsh economic sanctions and have been supplying Ukraine with weapons, the United States and its allies are concerned to avoid NATO being drawn into the conflict.

New recruits give Newcastle win at Saints in rearranged game