After more than four weeks of conflict, Russia has failed to seize any major Ukrainian city and Moscow signaled on Friday it was scaling back its military ambitions. 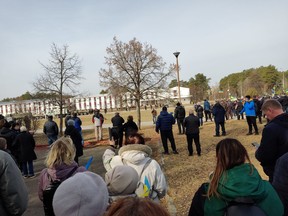 Military troops with armoured vehicles stand guard as demonstrators protest amid Russia’s invasion of Ukraine, in Slavutych, Kyiv Oblast, Ukraine in this picture obtained by Reuters from social media on March 26, 2022. Photo by OBTAINED BY REUTERS /Reuters

Biden’s comments on Saturday, including a statement earlier in the day calling Putin a “butcher,” were a sharp escalation of the U.S. approach to Moscow over its invasion of Ukraine.

In a major address delivered at Warsaw’s Royal Castle, Biden evoked Poland’s four decades behind the Iron Curtain in an effort to build a case that the world’s democracies must urgently confront an autocratic Russia as a threat to global security and freedom.

But a remark at the end of the speech raised the specter of an escalation by Washington, which has avoided direct military involvement in Ukraine, and has specifically said it does not back regime change.

“For God’s sake, this man cannot remain in power,” Biden told a crowd in Warsaw after condemning Putin’s month-long war in Ukraine.

A White House official said Biden’s remarks did not represent a shift in Washington’s policy.

“The President’s point was that Putin cannot be allowed to exercise power over his neighbours or the region,” the official said. “He was not discussing Putin’s power in Russia, or regime change.”

Asked about Biden’s comment, Kremlin spokesman Dmitry Peskov told Reuters: “That’s not for Biden to decide. The president of Russia is elected by Russians.”

Calling the fight against Putin a “new battle for freedom,” Biden said Putin’s desire for “absolute power” was a strategic failure for Russia and a direct challenge to a European peace that has largely prevailed since the Second World War.

“The West is now stronger, more united than it has ever been,” Biden said. “This battle will not be won in days or months, either. We need to steel ourselves for the long fight ahead.”

The speech came after three days of meetings in Europe with the G7, European Council and NATO allies, and took place roughly at the same time as rockets rained down on the western Ukrainian city of Lviv, just 60 kilometres from the Polish border.

“Their brave resistance is part of a larger fight for essential democratic principles that unite all free people,” Biden said. “We stand with you. Period.”

In his speech, Biden said NATO is a defensive security alliance which never sought Russia’s demise and he reiterated that the West has no desire to harm Russia’s people even as its sanctions threaten to cripple their economy.

Poland was under communist rule for four decades until 1989 and was a member of the Moscow-led Warsaw Pact security alliance. It is now part of the European Union and NATO.