Russia is reinvesting its military capabilities and presence in the region, while China has declared itself a ‘near Arctic’ state with strategic interests in the area, a government document says 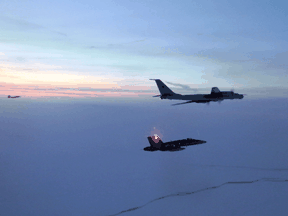 Canadian and American jets intercept a Russian Tu-142 maritime reconnaissance aircraft in 2020. The next generation of Norad will likely include a maritime element, for what’s called “all domain awareness.” Photo by Norad

“There’s no doubt the global security environment has changed… There is no question that our foreign policy, and certainly our defence policy has to adapt,” Anand told an Ottawa defence conference on March 11.

“The work is happening now to ensure that we are prepared for any eventuality, including in terms of protecting our Arctic sovereignty.”

Even before Russia invaded Ukraine in February, the Canadian government was flagging Russia’s activities in the region. Briefing materials prepared for Mélanie Joly when she became foreign affairs minister said that Canada views the Arctic as “emerging as an area of geostrategic importance and competition.”

What are Russia and China up to?

The briefing binder said China has also been expanding its “investments and engagement in the polar regions including seeking to influence Canadian Arctic communities.”

Adam Lajeunesse, the Irving Shipbuilding chair in Canadian arctic marine security at St. Francis Xavier University, said there’s no evidence of China looking to influence Northern communities in Canada. But of course, the government could know something that’s not public knowledge. And such behaviour is “absolutely China’s modus operandi,” Lajeunesse said. “If we look at the way China has tried to influence different Arctic countries … it often bypasses the central government to try and win friends and influence in communities themselves.”

That said, China has never deployed a warship to the Arctic circle, and is unlikely to do so in the near future, Lajeunesse said. “So the Chinese are not a military threat in the Arctic, certainly not yet. The Russians absolutely are,” he said.

The Arctic isn’t a monolith, though

It’s important to draw a distinction between the Canadian and European Arctic, Lajeunesse said, explaining Russia’s “ability to project power into the Canadian Arctic has not materially increased in the last decade.”

Russia has “considerable” militarization in the Arctic, but it “can’t even reach Canada. It’s not a threat to Canada,” he said. Indeed, Joly’s briefing binder pegs the threat of conflict in the area as low.

The most stylish one-piece swimsuits to shop now