The NDP and Liberals sold out in favour of more years in power, and it could accelerate the move of young voters to the right 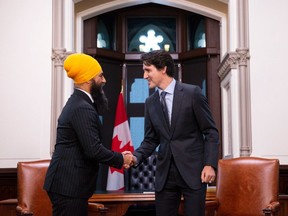 The new Liberal-NDP deal may be the best thing to happen to Conservatives in years — just, perhaps, not certain Conservatives.

Leadership hopefuls eager to take over the country’s top job sooner rather than later got a rude wakeup call when news of a confidence and supply deal broke Monday night. The pact will, barring any surprises from either side, see the Liberals retain power until 2025 in exchange for passage of some NDP priorities.

While certainly not great news for Tories in the near term, it presents intriguing opportunities for their medium-term prospects. Realistically, a minority government is the most the CPC could hope for in an early election, but this news could very well pave the way for a Conservative majority come 2025.

Justin Trudeau’s Liberals have been shedding support at a rate normally reserved for long-haired cats in the springtime. As any cat owner knows, this process begins with an extra layer of pesky fur on household surfaces, escalates to a plague of floofy tumbleweeds and, if not properly managed, results in a scene straight out of The Trouble with Tribbles.

Usually, the chaos dissipates with time, but if you have a cat that’s prone to overgrooming –– well, that’s when the real trouble begins. Two words: hairball city.

With this deal, the Liberals and NDP have over-groomed themselves. On the Liberals’ side, they’ve all but guaranteed Canadians who barely sent them back to Parliament Hill with a minority will be downright sick of them by 2025, particularly if they feel they’ve been denied an election many expected sooner rather than later.

Now, it’s true a version of this may have occurred anyways. It’s a well-honoured Canadian tradition for voters to kick parties out of power after three trips to the polls, although Lester B. Pearson and Pierre Trudeau retained Liberal power over five elections consecutively. But that still doesn’t mean votes would sway in favour of Conservatives.

With growing populism and affordability concerns, the NDP were also well positioned for an orange wave –– if they played their cards right. Historically, younger Canadians, when they don’t vote Liberal, are more likely to vote NDP than Conservative. But this latest move all but cements the NDP’s abandonment of millennials and Gen Z in favour of Jagmeet Singh’s cult of personality.

From a leftist perspective, it’s not a particularly good deal. All the supposed Liberal concessions were pretty much Liberal campaign promises, a slightly different version of them or a prior broken promise. Some even mirror Conservative campaign promises, like the beneficial land ownership registry, which will provide a public record of who owns what property in Canada.

Set the date: Filmmaker Atom Egoyan in Vancouver to talk about his most famous film

Set the date: Filmmaker Atom Egoyan in Vancouver to talk about his most famous film