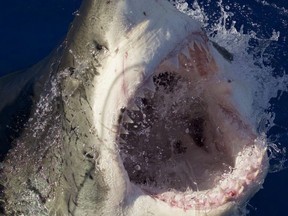 A young Australian woman is lucky to be alive after being attacked by a shark off a beach known for its deadly attacks.

According to media reports, the unnamed 20-year-old woman was swimming with a floatation device at Kelp Beds in Esperance, about 700 km southeast of Perth, on Sunday around 11:55 a.m. A drone captured the 10-foot shark about 30 minutes later lurking in nearby Wylie Bay.

Bathers told media that the woman was about 150 feet offshore on an inflatable pool ring when she was attacked. The creature apparently bit her on the torso.

A couple then ran into the water to rescue the victim, who lost consciousness as she was dragged to shore. The couple drove the woman to a nearby hospital and staff saved her life before evacuating her to Perth, where she is recovering.

The beach — well known for surfing — was immediately closed to the public.

“DPIRD is currently investigating a reported shark bite incident at Kelp Beds in the Shire of Esperance,” a report from the Department of Primary Industries and Regional Development said. The type of shark involved was not immediately known.

While the beach is popular, it has been the scene of a number of shark attack tragedies. In 2020, Andrew Sharpe was killed by a 12-foot predator while surfing with friends. Ten months earlier, diver Gary Johnson was killed by a great white shark a few kilometres away, and in 2017, teenager Laeticia Brouwer was killed in an attack.

“There is certainly a sentiment around town that there’s been a few incidents too many and something needs to change,” Sean Lindsay said. “Obviously a spate of attacks in the last two or three years really have had an impact on the community.”

Shire president Ian Mickel added: “It’s essential that if there’s a bad shark around, it should get taken. I’d hope we could manage them before another person gets taken by a shark.”

The attack comes as shark attacks have spiked worldwide with the U.S. accounting for 64% of the violent interactions.