The storm will allow viewing of the aurora borealis from as far south as Chicago and New York City, and across almost the entirety of Canada, for the rest of the week 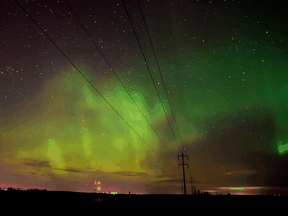 The skies near Crossfield, Alta. north of Calgary lit up by the northern lights in April 2015. Photo by Bryan Passifiume/Postmedia/File

With a strong geomagnetic storm set to hit earth Wednesday evening, skywatchers across Canada and much of the northern United States could be in for a dazzling display of the northern lights.

An intense period of activity on the surface of the Sun Monday sent at least 17 solar flares and a number of coronal mass ejections (CME) out into space, sending streams of charged particles toward the Earth.

Spaceweather.com reported on Wednesday that a large “cannibal CME” — a fast-moving plasma of charged subatomic particles that sweep up smaller, slower-moving ejections emitted by the Sun during the same event —  will strike earth after midnight UTC, or 8 p.m. ET.

As of Wednesday afternoon, physicists are predicting a G3-class geomagnetic storm — considered on the strong end of the scale used by the National Oceanic and Atmospheric Administration (NOAA.)

The storm will also allow viewing of the aurora borealis from as far south as Chicago and New York City, and across almost the entirety of Canada, for the rest of the week.

That same event disrupted global shortwave radio transmissions, triggered strong auroras visible from as far south as Texas and Florida, and disabled satellites orbiting above earth including Space Shuttle Discovery, which had only lifted off that morning.

The most severe solar storm in recorded history was the 1859 Carrington event, which allowed observation of the aurora from nearly everywhere on earth.

Some accounts reported the lights were so strong they awoke sleeping men and animals, believing it to be morning.

Electric currents induced by the storm caused widespread disruption of telegraph systems across the world — some operators reported fires and severe electric shocks from their equipment, while others managed to carry on conversations with other stations for hours with their equipment’s batteries disconnected.