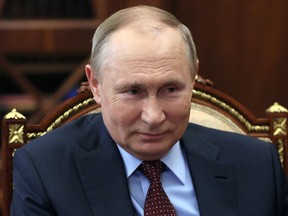 VIENNA — Russian forces that seized Ukraine’s Zaporizhzhia nuclear power plant have now placed staff running the facility under their command and restricted communications with the outside world, the U.N. nuclear watchdog said on Sunday.

“Ukraine reports that any action of plant management — including measures related to the technical operation of the six reactor units — requires prior approval by the Russian commander,” the IAEA said in a statement.

“In a second serious development, Ukraine has reported that the Russian forces at the site have switched off some mobile networks and the internet so that reliable information from the site cannot be obtained through the normal channels of communication,” it added.

The fire was quickly extinguished and there was no damage to reactors or release of radioactive material but the incident raised concerns about the potentially catastrophic consequences should the conflict damage one of the country’s four operating nuclear power plants.

IAEA chief Rafael Grossi voiced his worries over the information received from Ukrainian officials about Russian troops placing staff under their command.

“In order to be able to operate the plant safely and securely, management and staff must be allowed to carry out their vital duties in stable conditions without undue external interference or pressure,” he said.

The IAEA also expressed concern about developments at another Ukrainian site seized by Russia, the spent-fuel and radioactive waste facilities at Chernobyl, next to the now defunct power plant where the world’s worst nuclear accident happened in 1986.

More than 200 people there, both technical staff and guards, have not left since Feb. 23, the day before it was seized, the IAEA said, despite the U.N. agency’s calls for the technical staff to be rotated out on safety grounds.

The Ukrainian regulator said it was “facing problems communicating with personnel” at Chernobyl, said the IAEA, adding that communication was only possible via email. (

COVID-19: B.C. hospitalizations declining, so why are we still seeing so many deaths?