One main logistical challenge appears to be seasonal: early-spring mud that prevents movement of its poorly maintained trucks 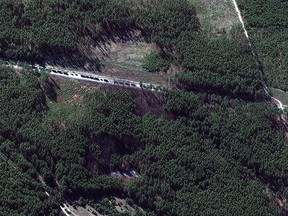 Questions remain as to why the approximately 80-kilometre-long Russian convoy is simply staying put north of Kyiv and why Ukraine has yet to fully attack it.

Pentagon spokesperson John Kirby said on Wednesday the limited convoy movement could be due to Russia’s forces regrouping. Kirby gave several potential reasons for the standstill:

1. “We believe the Russians are deliberately regrouping themselves and reassessing the progress that they have not made and how to make up the lost time.

2. “We believe they have experienced logistic and sustainment challenges. Challenges that we don’t believe they fully anticipated.” They may be running short on fuel, with supply tankers unable to get to them, and the soldiers are facing shortages of food.

But a larger and more insidious problem may be that the trucks themselves have not seen routine preventive maintenance. The equipment may have been left to sit uncovered for long periods of time, allowing various engine parts and hoses to deteriorate and tires to weaken. Best practices call for a universal monthly check, test drive and repair of issues. Something as small as an insect nest in a hose could create problems. And if a truck at the head of the convoy stalls or runs out of fuel, so many others behind it will be stuck or will take valuable time to circumvent the blockage.

Observers suggest routine maintenance has either not been performed or, in the case of many blown-out tires, cheaper Chinese-made tires have been substituted that lose structural integrity if the trucks were parked in the direct UV rays of the sun.

As a maintenance industry motto runs: “If you don’t schedule time for your maintenance, your equipment will schedule it for you.” If indeed this is the case with this stalled convoy, it seems the worst possible time to learn this lesson.

3. “They are getting resistance from the Ukrainians. We have some indications, nothing that we can 100 per cent verify, that the Ukrainians have indeed tried to slow down that convoy.”

4. But there is another, more mundane and foreseeable possibility: springtime mud.

Famous for its “rasputitsa” mud seasons in spring and fall, the area becomes challenging to manoeuvre. Armies experienced this local obstacle in the first and second world wars, yet surprisingly, the Russians sent the vehicles through on the same roads again. Now, trucks not within that convoy are keeping to paved roads, jamming some of them as well. 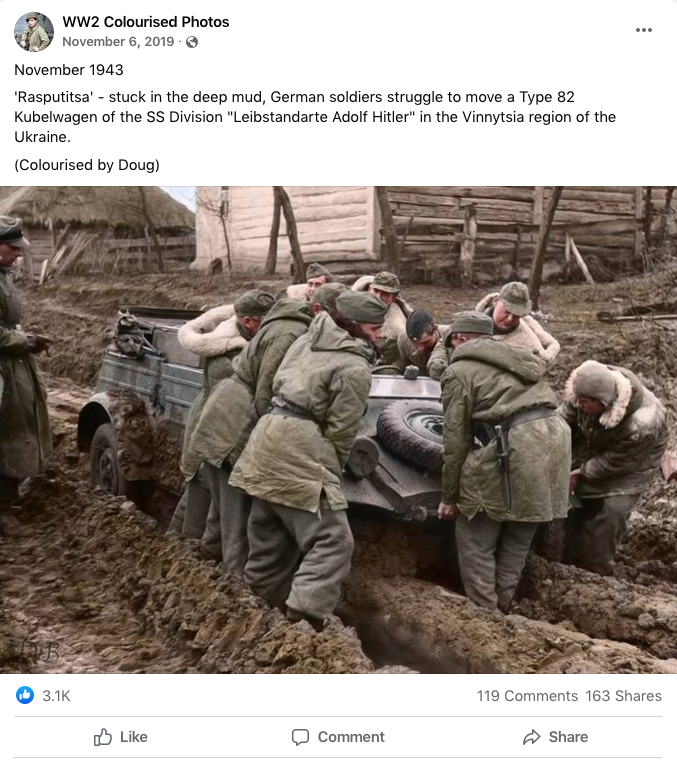 The deep and widespread rasputitsa, which bogs even the lightest vehicles in the mud, is amplified by the enormous weight of the missile system and truck infrastructure, sinking the army trucks deeper, putting enormous pressure on what may be substandard tires. And the supply network for replacements appears to be sorely challenged. 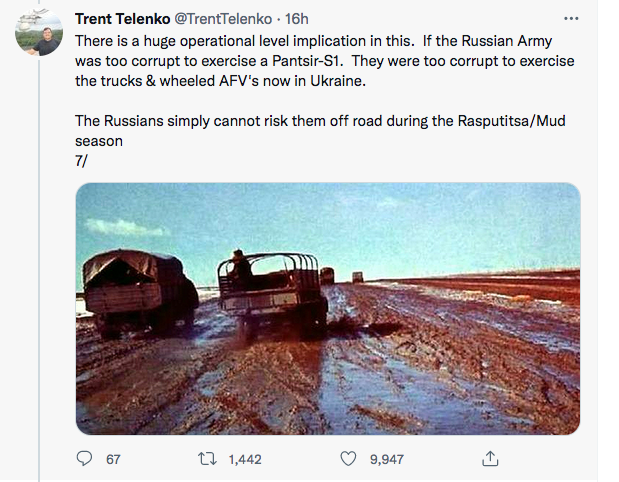 Trent Telenko, a retired Pentagon staff specialist and military history blogger, has a detailed Twitter thread on what he says is the main reason the convoy is stalled.