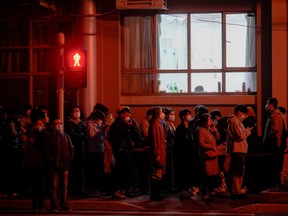 People line up near a nucleic acid testing site outside a hospital during mass testing for COVID-19 amid the pandemic, in Shanghai, China, March 27, 2022. Photo by Aly Song /REUTERS

SHANGHAI — China’s financial hub of Shanghai launched a planned two-stage lockdown of the city of 26 million people on Monday, closing bridges and tunnels, and restricting highway traffic in a scramble to contain surging local COVID-19 cases.

The snap lockdown, announced by Shanghai’s city government on Sunday, will split the city in two roughly along the Huangpu River for nine days to allow for “staggered” testing. It is the biggest COVID-related disruption to hit the city so far.

The announcement also marks a turnaround for the local government, which last week expressly denied Shanghai would be locked down as it pursued a more piecemeal “slicing and gridding” approach to try to prevent infections from spreading.

“Containing the large scale outbreak in our city is very important because once infected people are put under control, we have blocked transmission,” she said, adding that testing would be carried out until all hidden risks are eliminated.

A record 3,450 asymptomatic COVID cases were reported in Shanghai on Sunday, accounting for nearly 70% of the nationwide total, along with 50 symptomatic cases, the city government said on Monday.

Shanghai’s Public Security Bureau said it was closing cross-river bridges and tunnels, and highway tollbooths concentrated in the city’s eastern districts through April 1. Areas to the west of the Huangpu River will have similar restrictions imposed April 1-5.

In a statement posted to its official Weibo account, the bureau said traffic controls would be implemented on highways into and out of the city, requiring people leaving Shanghai to show proof of negative results from nucleic acid tests taken within 48 hours.

The city government said on Sunday it would suspend public transport, including ride-hailing services, in locked down areas. It also ordered the suspension of work at firms and factories, with the exception of those offering public services or supplying food.

U.S. automaker Tesla is suspending production at its factory in the city for four days, two people familiar with the matter told Reuters. Tesla did not immediately respond to a request for comment on Monday.

The recent surge of COVID cases in China has added to pressure on the world’s second-largest economy, likely further chilling consumer spending.

“Due to the high transmissibility of Omicron and strengthened (zero-COVID strategy), markets need to especially be concerned about a slide in growth in Q2.”