The truckers have adopted GiveSendGo as their new fundraising platform. The organization bills itself as the leader in Christian fundraising. 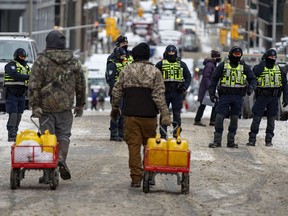 Truckers occupying downtown Ottawa to protest vaccine mandates have moved quickly to secure a new funding source after the popular GoFundMe platform closed off access to $10 million in donations.

The truckers have adopted GiveSendGo as their new fundraising platform.

The organization bills itself as the leader in Christian fundraising, but it has also hosted fundraising efforts conducted on behalf of the Proud Boys, a neo-facist group deemed a terrorist organization by the Canadian government.

On the new platform, the truckers had already raised $1.3 million towards a $16 million goal by Saturday afternoon.

GiveSendGo was having trouble handling the sudden traffic on its website, which often displayed a server error Saturday. “We know the site is slow,” the company said on social media. “We are working on it! All hands on deck.”

Donations were coming in fast late Saturday morning at more than $70,000 an hour.

In a video on the GiveSendGo website, Tamara Lich, a key organizer of the truckers’ protest, said GoFundMe has frozen the bulk of its funds after releasing $1 million.

Lich said the truckers have decided to team with GiveSendGo “which will enable us to get donations into the hands of the truckers much, much quicker while everyone gets the rest of this stuff sorted out.”

“We plan to be here for the long haul – as long as it takes to ensure that that your rights and freedoms are restored,” Lich said in a statement recorded Friday in downtown Ottawa.

All 58 Photos for Gallery

Full Screen is not supported on this browser version.

You may use a different browser or device to view this in full screen.

On Friday, GoFundMe announced the convoy would be cut off from $10 million raised to support the truckers because the money was going towards “the promotion of violence and harassment” in contravention of its terms of service.

The California-based company initially said contributions would be given back to donors who applied for a refund, and that unclaimed money would be sent to charities verified by GoFundMe.

But following a barrage of complaints from angry donors, the crowdsourcing company changed direction. On Saturday morning, it said all contributions will be automatically refunded directly to donors within seven to 10 business days.

“Donors do not need to submit a request,” GoFundMe said in a statement.

It means the new support fund for truckers could quickly see a large influx of money.

Ottawa police and politicians had welcomed the news of GoFundMe’s decision, believing it would cut off a critical source of support.

Ottawa Police Service Chief Peter Sloly has repeatedly said the truckers’ protest is unusual, not least because of its extraordinary funding levels.

The Ottawa police, in a statement on social media, thanked GoFundMe for its actions: “We want to thank GoFundMe for listening to our concerns as a city and a police service. The decision to withhold funding for these unlawful demonstrations is an important step and we call on all crowdfunding sites to follow.”

Ottawa Mayor Jim Watson also thanked GoFundMe for its stand and implored other fundraising platforms to do the same. Enabling the truckers’ fundraising efforts, he said, would “deal a blow to our efforts to put an end to this occupation.