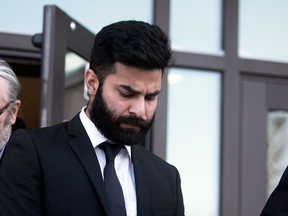 Jaskirat Singh Sidhu leaves provincial court in Melfort, Sask., January 8, 2019. Sidhu, the driver of a transport truck involved in a deadly crash with the Humboldt Broncos junior hockey team’s bus, pleaded guilty to all charges against him. Photo by Kayle Neis/The Canadian Press

CALGARY — The Canada Border Services Agency has rejected a request from the former truck driver who caused the deadly Humboldt Broncos bus crash that he be allowed to stay in Canada once his prison sentence has been served.

As a result, the case of Jaskirat Singh Sidhu will now be handed over to the Immigration and Refugee Board to decide if he should be deported back to India.

Sidhu’s lawyer, Michael Greene, said he and his clients had hoped for better news.

“My clients are devastated of course. It’s just terrible news. They had hoped for the best, but it was not to be,” Greene told The Canadian Press Wednesday.

“The deportation hearing, or as they call it the immigration inquiry, will be more or less automatic. They have decided to push through that process by sending him to this hearing where the result will be automatic — a deportation order will be issued.”

“I can confirm that Mr. Jaskirat Singh Sidhu has been referred to the Immigration Division of the IRB for an admissibility hearing on allegations of serious criminality based on convictions in Canada,” Pape said in an email.

“When this happens a member of the immigration division holds a hearing in the case to determine whether the allegations are founded and if so issues a removal order.”

In March 2019, Sidhu was sentenced to eight years after pleading guilty to dangerous driving causing death and bodily harm in the April 6, 2018, collision that killed 16 people and injured 13.

Court was told that Sidhu, a newly married permanent resident, went through a stop sign at a rural Saskatchewan intersection and drove into the path of the Humboldt Broncos bus carrying players and staff to a junior hockey league playoff game.

Greene said Sidhu is already eligible for parole and “they can deport any time after parole eligibility.”

He is considering challenging the decision by the agency in Federal Court once he sees the reasons for rejecting his application.

“We have the opportunity to challenge the decision in Federal Court but the only thing we can challenge on is if it was unreasonable or there was a lack of procedural fairness,” Greene said.

Chris Joseph, whose son Jaxon died in the collision, was one of several Broncos families who have written letters asking for Sidhu to be deported, saying the laws are there for a reason.

Jaida Lee will break a baseball gender barrier at the Canada Games, proving the diamond is this teen girl’s best friend