So far, the defiant Ukrainian President has already put the kibosh on a U.S. offer to pull him out of his embattled nation, quipping: “I need ammunition, not a ride.” 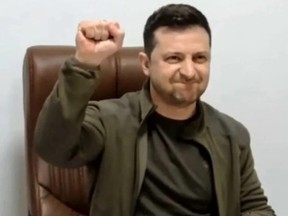 NO SHORTAGE OF GUTS: Plans are underway to rescue Ukraine President Zelenskyy in the event the situation on the ground becomes untenable. GETTY IMAGES

The U.K. Sun reports that more than 70 SAS fighters have joined 150 U.S. Navy SEALS at a remote base in Lithuania in the event the situation on beleagured Ukraine becomes untenable. Elite Ukrainian soldiers are also present and will be invaluable for their on-the-ground experience.

In that event, Zelenskyy would be leader of a government in exile and remain an inspiration to his people and hundreds of millions of others around the world, who have been in awe of his leadership under fire.

According to the report, a rescue mission would occur under cover of darkness

But so far, the defiant Zelenskyy has already put the kibosh on a U.S. offer to pull him out of his embattled nation, quipping: “I need ammunition, not a ride”.

That may not last long. A number of assassination missions have been thwarted and now, Russian Spetsnaz special forces are targeting the heroic 44-year-old former comedian.

A senior U.K. source said: “The most likely sensible option could be to relocate Zelenskyy out of Kyiv, where he could be picked up. We have aircraft, but the distance is critical.”

A British military spokesperson had no comment on a possible rescue mission.

The British Secret Service is reportedly monitoring the Russian invasion of Ukraine by tracking its soldiers’ social networking use — including gay hook-up app, Grindr.

According to the Daily Mail, as the Russian military built up its strength on the frontier with Ukraine, British intelligence was certain wannabe czar Vladimir Putin had tipped his hand and was planning an all-out invasion of his neighbour. Among the clues were posts on Russian social media site VK.

Equally helpful has been Grindr, a Secret Service source told the Mail. Putin had banned what he called “homosexual propaganda” in 2013. However, that didn’t stop users.

“These sites were a treasure trove for our spies, and the dating apps in particular — soldiers and those involved in the military effort were particularly unguarded,” the British intelligence source said. “It meant we were very au fait with the plans and the imminence of the invasion, right down to details such as the movement of blood supplies to the Russian troops.”

The intelligence gleaned from the sites was shared with Ukraine’s Secret Service.

Meet the new Worker and Parasite.

Apparently, the Kremlin’s Vlad Hatter has produced a short cartoon explaining why he invaded Ukraine. The Daily Mail reports that the three-minute animated extravaganza shows kids wearing T-shirts representing Ukraine, Germany, Russia, and the U.S. Then it “explains” the “War in Donbas.”