About 50 refugees, most of them women and children, arrived at the International Youth Meeting Center in Oswiecim on Sunday. 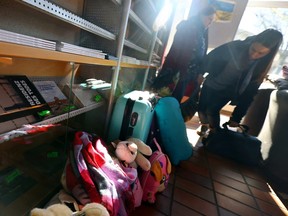 Luggage and toys of Ukrainian refugees who have nowhere to go and arrived by bus from Przemysl, are pictured at the International Youth Meeting Center, around two kilometres away from the former Nazi German Auschwitz-Birkenau death camp, where they are provided with temporary accommodation, in Oswiecim, Poland, March 13, 2022. Photo by Fabrizio Bensch /Reuters

OSWIECIM — A youth education centre near Auschwitz dedicated to preserving memories of the Second World War and the Holocaust has opened its doors to help refugees fleeing war in the present.

Days after leaving her home city of Nikopol in southern Ukraine with her mother and three you, Tamila Tvardovska could finally set her heavy bags down and rest.

The 39-year-old was among 50 refugees, most of them women and children, who arrived at the International Youth Meeting Center in Oswiecim on Sunday, a quiet building which normally hosts educational events.

“I think there will be peaceful skies above our heads (here), Tvardovska said.

The centre, which sits around two kilometres away from the former Auschwitz-Birkenau death camp, aimed to do everything possible to make sure that those fleeing the war in Ukraine had a safe place to stay, Leszek Szuster, its director said.

So far, the centre has served nearly 2,000 meals to refugees since the beginning of March.

The number of refugees fleeing Ukraine since Russia invaded on Feb. 24 climbed to more than 2.8 million, United Nations data showed on Monday, in what has become Europe’s fastest growing refugee crisis since World War Two.

At least 1.7 million of them have crossed the border into Poland, where citizens have stepped in to house refugees and non-governmental organizations and local communities have mobilized volunteers to provide everything from food and water to mobile SIM cards.

Pavel, a 27-year-old economist, took a drag from his vape pen in the courtyard of the centre as he recalled scenes of chaos when he fled Kyiv with his girlfriend and his mother soon after the start of the invasion.

“We have another war in Europe and we are being saved by this place,” Pavel said.

To suddenly become a refugee and to be sheltering in a place of such historical significance as Auschwitz was surreal, he said.

More than 1.1 million men, women and children, mostly Jews, lost their lives at Auschwitz, built by the Nazi Germans in occupied Poland as the largest of their concentration camps and extermination centres. The Nazis killed 6 million Jews during the Second World War.

Russia describes its actions as a “special operation” to demilitarize and “de-Nazify” Ukraine. Ukraine and Western allies call this a baseless pretext for Russia’s invasion of the democratic country of 44 million.

Just a few weeks ago, Pavel said, he was playing guitar and eating sushi in his flat with his girlfriend.