The term “no-fly zone” was popularized during the 1990s, particularly when U.S.-led forces established them over Kosovo and Iraq. 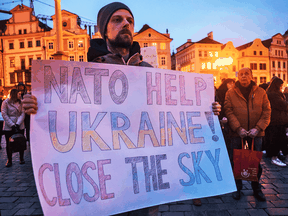 A protester calls for a no-fly zone over Ukraine during a rally in Prague on March 15, 2022. Photo by Michal Cizek/AFP via Getty Images

In his Tuesday speech to the House of Commons, Ukrainian President Volodymyr Zelenskyy officially called on Canadians to back a no-fly zone over his country. “Close the airspace, please stop the bombing. How many more cruise missiles have to fall on our cities until you make this happen?” he said.

It’s an increasingly popular notion; a recent poll has nearly three quarters of Canadians calling for NATO to prepare for intervention in Ukraine. But as detailed below, no-fly zone over Ukraine would be an entirely different thing than the one Canadian fighter jets helped to establish over Libya with relative ease in 2011.

The term “no-fly zone” was popularized during the 1990s, particularly when U.S.-led forces established them over Kosovo and Iraq. According to one U.S. Air Force definition, a no-fly zone refers to a “designated area in which flight by a specific nation or entity is prohibited by another nation or entity.” The concept is simple enough, but a problem arises if that other nation doesn’t want its flight prohibited.

In that case, you’re going to fight for what military strategists call “air supremacy”; this is where you’ve not only shot down your enemy’s air force, but you’ve also eliminated any means they have at shooting down yours. So you basically have to win an air war, and do it against a peer military.

This kind of air war basically hasn’t happened since the Second World War. Although they didn’t call it a “no-fly zone” at the time, air supremacy was effectively what the Western Allies were trying to establish over Western Europe during the lead-up to the 1944 D-Day invasion. It cost them 40,000 aircraft and 160,000 lives.

To do it correctly, a no-fly zone would mean striking targets on the ground

The textbook example of a no-fly zone was Operation Southern Watch. After the end of the 1991 Persian Gulf War, the U.S. and its allies (including Canada) declared the skies closed over the entire portion of Iraq below the 32nd parallel.

To do that, they had to blow up an awful lot of Iraqi equipment on the ground. Iraqi dictator Saddam Hussein initially didn’t recognize the no-fly zone, so starting in 1992 coalition forces began to bomb Iraqi air bases and anti-aircraft batteries, destroy missile sites, and shoot down any Iraqi fighter jet that tried to stop them. Right up until the U.S. Invasion of Iraq in 2003, enforcing this no-fly zone required near-constant violence to counter the 400 plus incidents of Iraqi forces shooting at coalition jets.

Set aside the inconvenient fact that most of the Russian aircraft now operating over Ukraine are coming from bases within Russian territory. A no-fly zone isn’t going to last long if Russian forces on the ground keep shooting down the Western air forces sent to enforce it.

Yusei Kikuchi rounds out the best Blue Jays rotation in a long time. But there’s still work to be done